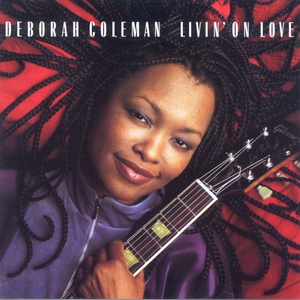 Deborah Coleman is unquestionably, as USA Today notes, "one of blues music's most exciting young talents." Though she has released four studio albums on the Blind Pig label that have firmly established her as one of the leading lights in the blues field, it has been her knockout live performances that have made her one of the hottest commodities on the contemporary scene.

Coleman has earned a well-deserved reputation for raw energy and crowd-pleasing shows. A highly charismatic stage performer, Coleman is able to stretch out in the live setting and demonstrate her considerable guitar skills. USA Today called her a "fiery guitarist who makes the spine tingle with her unbridled raw energy."

Among people seeing Coleman perform live for the first time, a common reaction is: "Wow, I like her records, and I knew she was good, but I didn't know she was this good." Coleman's first live recording, Soul Be It!, finally captures what Living Blues called her "fire on the fretboard flamboyance."

Given that outstanding live performances have been the hallmark of Deborah's artistry, it's fitting that she return to the live setting for her new release. Even the beginning of her professional music career was marked by a great live show - in 1993 she won a National Amateur Talent Search. The director recalls, "Coleman ruled, delivering a bone-rattling set to a capacity audience that almost shut down the contest with their demand that she perform repeated encores." Following her 1999 performance at the W.C. Handy Awards, Billboard called her "an artist to be reckoned with," noting that her incendiary playing "very effectively stole the scene." Later that year she turned in a stunning set at the San Francisco Blues Festival that had the crowd roaring its approval and critics searching for superlatives. In 2000 Coleman gave another highly impressive performance at the "Tribute To Muddy Waters" concert at the Rock and Roll Hall of Fame that wowed the crowd and generated a lasting buzz among the assembled critics and blues afficionados. In 2002 Coleman will be a featured performer on a special arts center tour of the U.S. entitled "Front Porch Blues" that will also include Charlie Musselwhite, Corey Harris, and Elvin Bishop.

Coleman was born in Portsmouth, Virginia and raised in a music-loving military family that lived in San Diego, San Francisco, Bremerton, Washington, and the Chicago area. With her father playing piano, two brothers on guitar, and a sister who plays guitar and keyboards, Deborah felt natural with an instrument in her hands, picking up guitar at age eight.

At fifteen, she started to perform with a series of rock and R&B bands. She started out as a bass player, but after hearing Jimi Hendrix, switched to lead. Radio was an important early influence. "Back then, the formats of the radio stations were more diverse. I remember hearing Joe Cocker, James Brown, Ray Charles and the Beatles on the same station." As her interest in guitar grew, she began listening to rock groups such as the Yardbirds, Cream, and Led Zeppelin, and followed the roots of their music back to the blues. "Jeff Beck was one of my favorites," she recalls. "I didn't find out until later that they were doing blues tunes and I went to find the original artists." A pivotal event for Deborah was a concert she saw when she was twenty-one that featured Howlin' Wolf, Muddy Waters, and John Lee Hooker all on the same bill. "I will never forget that show. It started me on a path to my roots."

Today Coleman's accomplished guitar style reflects the influences of Jimi Hendrix, Buddy Guy, Freddie King, Albert Collins and Larry Carlton. Her vocal inspirations are as often found in the singing of Chrissie Hynde and Patti Smith as in the recordings of Bessie Smith, Janis Joplin, Memphis Minnie, and Alberta Hunter. The fact that she's an African-American female who is a lead guitarist, singer and songwriter may make her a unique artist and put her in a category all by herself, but it is Coleman's artistry and passion that have placed her on the road to success.

When she was twenty-five, Coleman got married and put her musical career aside for a while so she could concentrate on raising her daughter, developing a career as an electrician along the way. "I raised a family, held a 9 to 5 job, then I finally decided to play music full time." Coleman got the big break she was looking for in 1993 at the aforementioned National Amateur Talent Search, sponsored by the Charleston Blues Festival. Her "band" consisted of her brother and his friend, both of whom only played heavy metal. "We rehearsed for a week, and I taught them tunes. It was the beginning of my professional career," she said. She knocked the crowd and the judges out with a performance full of confidence and fire. She took first place in the competition, and hasn't looked back since. She immediately put together her own group and began her solo career as a bandleader and featured performer.

Winning the contest earned Coleman free studio time which she used to record a demo and secure a record deal with New Moon Records, a Chapel Hill, North Carolina-based label that released her first album, Takin' A Stand, in 1994. Her fresh, energized approach to the blues began to attract attention. Living Blues magazine profiled her in a two page spread as one of the top up and coming young blues artists.

The release of her national debut on Blind Pig in 1997, I Can't Lose, created quite a stir. Coleman was profiled in Musician magazine and reviewed by the Associated Press, JazzTimes, and Downbeat. She was also featured in Blues Revue, which said, "This impressive, exciting recording should please not only blues fans of the '90s but also those wanting to catch a glimpse into the future. Coleman easily demonstrates why she is one of the leaders of the pack playing blues." Living Blues echoed those sentiments: "On purely musical terms, I Can't Lose is one of the more impressive CDs to come down the pike in quite a while." Radio loved the disc as well - I Can't Lose reached #3 on the Living Blues radio charts. College Media Journal, a radio trade publication, said, "Jocks have little to lose by spinning any of the cuts on the CD."

In 1998 her second release for Blind Pig, Where Blue Begins, received even more airplay and critical acclaim, checking in at #3 in the CMJ list of Adult Album Alternative format adds upon its release. The Chicago Reader said that "Such diverse and well-honed artistry would be notable in a seasoned veteran; for a developing artist like Coleman it portends greatness." The Boston Globe succinctly noted that "Deborah Coleman knows how to give the blues a kick in the ****." All the attention generated by Where Blue Begins culminated in both Blues Revue and Living Blues magazines simultaneously running cover photos and lengthy features on Deborah for their year end issues.

The 2000 release of Soft Place To Fall marked Deborah's mastery of both the rock and blues idioms. Produced by Jim Gaines (Santana, Luther Allison, Stevie Ray Vaughan), the album featured mainstream selections that took her beyond her blues roots as well as blistering covers that proved she could still serve up the blues as compellingly as any performer on the circuit today. Down Beat said, "She sings quite well and she throttles her Telecaster with more musical intelligence and character than most any testosterone-jacked guitar man you can name." Blues Revue added, "Coleman's latest album left me dazed. Put on this CD expecting run-of-the-mill blues, and you'll have little cartoon stars circling your head, too."

The following year Coleman, who has been called a combination of Jimi Hendrix and Tracy Chapman, won the prestigious Orville Gibson Award in the category of "Best Blues Guitarist-Female" and though she's received six W.C. Handy Award nominations, the one she most treasures is for "Best Guitarist," a category crowded with her male counterparts.

In 2001 the release of Coleman's next CD on Blind Pig, Livin' On Love, continued the upward trajectory of Deborah's music and career. The album marks the full maturation of Deborah's many talents. As Blues Revue stated, "Coleman just keeps getting better, and Livin' On Love is livin' proof." Her guitar playing is by turns ferocious and understated and her voice more supple and expressive than ever. Her development as a songwriter is remarkable. The easy artistry of her writing exhibits a directness and simplicity others will envy. Blues Revue continued, "the songs neatly straddle the blues/rock border, thanks to Coleman's smart, hook-filled songwriting. The result is something simultaneously fresh and familiar, aided by her gorgeous, tough-yet-tender vocals."
Downbeat agreed that Livin' On Love contains "some of her finest singing and guitar playing to date," adding, "Coleman's approach to blues-rock seems more self-confident than ever before, now that she's acquired an attitude to complement her unassailable musical integrity." Again, radio embraced her work, making the album the #3 most added record in Adult Rock, according to Album Network, a national radio trade publication.

Given the accolades and growing buzz about her live shows, capturing the excitement on a live recording seemed like the next natural step. Soul Be It! was recorded at The Sierra Nevada Brewery, a venue chosen because of its state-of-the-art performing theater that features a warm, true, "live" sound. Coleman took full advantage of the occasion to showcase her prowess as a performing artist and passionate guitarist. Coleman, co-producer of the live CD, was superbly backed by her current band: longtime members Billy Crawford on second guitar, Debra "Nardi" Salyer on bass and newcomer Jason Paul on drums. Says Coleman, "As far back as I can remember I have been captivated by the ‘live' performance. For me, it is nothing short of mesmerizing."

Deborah Coleman is an artist who has truly come into her own as a talented writer, emotive singer and a guitar player of unparalleled fire and grace, and, as amply demonstrated on Soul Be It!, it is her musicianship that is nothing short of mesmerizing.
30
What's This
Advertisement