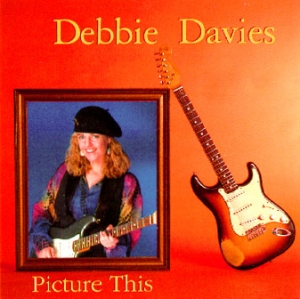 Debbie Davies has taken the blues world by storm since leaving her mentor, the late guitar great Albert Collins. There are more female guitarists on the scene today than ever before, but Davies is the only one who came up through the ranks by cutting her chops with one of the masters, and she is proud to have been among the few that have broken down barriers and enabled others to follow. Her most recent Blind Pig release, I Got That Feeling, showcases her artistic maturity and exceptional ability as a guitarist, singer, and songwriter.

Debbie was born in Los Angeles in the mid '50s to musician parents. As a child she was often in the presence of top-flight musicians at her father's recording sessions. Industry heavyweights such as Frank Sinatra, Pearl Bailey, Louis Bellson, and Leon Russell were among a few of the names that made profound early impressions on Debbie's musical psyche. Her own opportunities to sing in commercials and Walt Disney projects further solidified the child's desire for a career in music.

It was the combined impact of her father's own arrangements of Ray Charles tunes and the British blues invasion spearheaded by John Mayall and Eric Clapton that drew Debbie to the sounds of R&B and blues music.

Later Debbie would earn her electric guitar stripes in the San Francisco area, playing in many blues and rock & roll bands. She moved back to L.A. in 1984 and played a series of blues jams before landing the lead guitar spot in Maggie Mayall And The Cadillacs, an all-female R&B band. Davies' association with Maggie's husband, blues innovator John Mayall, is a long and continuing one. Her guitar track appears on the cut "Without Her" on John Mayall's Island Records release, A Sense Of Place.

After several years the Cadillacs broke up, and Debbie started performing under her own name around the L.A. area. Around that time she was introduced to Albert Collins by her friend Coco Montoya. This led to a series of invitations to sit in with Collins, including an appearance at the prestigious San Francisco Blues Festival in 1987.

Within six months, she got the call to become a member of Albert Collins And The Icebreakers, and for the next three years Debbie was a featured performer with the band. Her immense talent earned her the spotlight, opening each show as the band's lead guitarist and vocalist. Albert said he used to enjoy "siccing" Debbie on unsuspecting guitarists who happened to sit in. He also invited her to record on his 1991 Grammy-nominated self-titled album on Pointblank.

"Playing on stage behind an artist as powerful as Albert has had a profound effect on me. He provided me a tremendous opportunity to experience the world of traditional blues from the inside," says Debbie. In addition to her nightly guitar duels with Albert, Debbie has shared the stage with blues giants such as Buddy Guy, Robert Cray, Koko Taylor, Duke Robillard, and John Mayall.

In the summer of 1991, Debbie was the lead guitarist for Fingers Taylor And The Ladyfingers Review, a band comprised of many of the nation's best female musicians, and which served as the opening act for Jimmy Buffet's "Outpost Tour." Then in September, Debbie began carving out a thriving solo career fronting her own group, the Debbie Davies Band, which immediately began winning widespread recognition and rave reviews as a national and international touring act. Her debut album, Picture This on Blind Pig, collected reams of positive press notices, was a hit on the blues radio charts for months, and proved to be one of the best-selling blues titles of the year.

Davies, who is now based on the East Coast, has been nominated four times for a W. C. Handy Award as Best Contemporary Female Blues Artist. Davies was featured three times in 1994 on the nationally syndicated House Of Blues radio program, and her stature as a guitarist led to her inclusion in a TV documentary about the 40th anniversary of the Fender Stratocaster guitar.

Davies' eagerly-awaited follow-up album, Loose Tonight, was produced by Debbie and Billy Rush, former guitarist with Southside Johnny And The Asbury Jukes. It displays more of Debbie's songwriting abilities. "I wanted to define myself more as an artist and writer rather than strictly a guitar-slinger," she says.

Davies' latest release, I Got That Feeling, is her best accomplishment yet. Recorded in Memphis under the helm of Grammy-winning producer Jim Gaines, who has worked with Santana, Steve Miller, Huey Lewis, and Stevie Ray Vaughan, the album features Debbie's razor-sharp guitar work and demonstrates that she's really come into her own as an outstanding vocalist. She's also supported on the new album by labelmate Coco Montoya and Louisiana guitarist Tab Benoit.

While Davies' current music incorporates influences ranging from traditional blues players like Magic Sam and T-Bone Walker, to the more modern sound of Freddie King and Albert Collins, as well as the Texas thunder of the Vaughan Brothers, it also is unmistakably her own, stamped with a well-earned attitude and a sly observational wit. With her forceful guitar licks, fierce solos and earthy vocals, Debbie Davies plays no-nonsense blues for the 90's, and will continue to leave her mark on the genre for a long time to come.
3
What's This
Advertisement