Deanna Bogart - Out To Get You 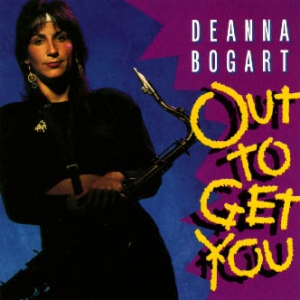 "She plays the keyboard and sings like nothing you've ever heard - but should! Her vocal style is as full of vitality as her piano playing - both are sexy and deep." -- The Baltimore Sun

Deanna Bogart, the award-winning, multi-instrumentalist known for her vast musical range, broadens her horizons even more on Just A Wish Away....

Her newest Blind Pig Records release finds Deanna collaborating with a new cast of superlative musicians in territory that is at once unfamiliar and intriguing, intimate and provocative. She invites us on her own personal and musical transitional journey that's taken her in a single year from the Chesapeake Bay to Nashville, and from the high desert of Southern California to deep in the Louisiana bayou, where this CD was recorded.

On Just A Wish Away… this immeasurably talented pianist, saxophonist, singer, composer, and bandleader immerses us in her genre-free musical palette with the added colors of trombones, pedal steels and the rhythms of New Orleans. It also features some of Deanna's strongest songwriting to date, artfully evoking the excitement of new possibilities tinged at times with a hint of wistful melancholy at what is left behind. From the locomotion of “If It's Gonna Be Like This” to the tender and surprising “Back and Forth Kid,” to the sultry, horn-driven “Collarbone,” Bogart's signature cut-above songwriting demonstrates the diverse dialects of her musical fluency.

Introspective, fun and feisty, rousing and inspiring; once again, Deanna happily marries it all together in pure Bogart form, and sets it to music. See for yourself what happens when a musician takes another leap of faith into the unknown, where some dreams might be "just a wish away."

Born in Detroit, Deanna spent her early years in Phoenix and New York City, climbing on any available piano bench to plunk and play with preternatural panache. Around the age of six, she was "gently removed" from the Brooklyn Conservatory of Music for playing piano by ear instead of learning to read music. While in middle school, Deanna yearned to play the saxophone. Typical of those times though, she was told, "Girls play the clarinet, not the sax." Thankfully for us all, that tide has changed.

Deanna combines the best of boogie-woogie, contemporary blues, country and jazz into a splendid blend she calls “blusion.” This fusion -- spontaneous, sophisticated, fearless and fun -- has, among other honors, garnered her three consecutive Blues Music Awards for “Horn Instrumentalist of the Year” (2008, 2009 and 2010) and even a BMA nomination in 2013 for “Pinetop Perkins Piano Player of the Year.” She has won, at last count, more than 20 Wammies, the music awards for the hotly contested Washington, D.C. region.

Recognized for her dazzling keyboards, soulful saxophone, smoky vocals and cut-above songwriting, Deanna easily wins the hearts of fans on land and at sea on chartered cruises. She is a featured player in the Legendary Rhythm and Blues Revue, jamming with Tommy Castro, Magic Dick (founding member of the J. Geils Band), as well as prominent guitar slingers. Deanna remembers well her early years as a budding musician and is an avid educator and mentor, sharing her insight and wisdom with students of all ages.

Perennially popular with a knack for engaging her audience, Deanna has played for U.S. troops in Iraq, Kuwait and Egypt as part of the “Blues on the Nile” tour, including performances at Cairo University, the Cairo Opera House and even a historic concert at the Great Pyramids. Bogart has appeared on stage with the likes of BB King, Brian Setzer, Buddy Guy, James Brown, Doctor John, They Might Be Giants, Spyro Gyra, Ray Charles, Bela Fleck and the Flecktones, the Neville Brothers and many more.

Bogart began to develop her unique style as a member of Cowboy Jazz, a legendary Maryland-based group that dedicated itself to the sound of 1940's western swing music. She joined the group at age 21 as vocalist and spent several years learning and playing the cowboy rhythms that are central to western swing. As her musical appetite grew she spent nearly two years playing R&B with the Washington D.C.-based Root Boy Slim.

After getting her own band off the ground in 1988, she began playing throughout the mid-Atlantic region and the West Coast, slowly building a following and a reputation.

Blind Pig released Deanna’s debut album, Out To Get You, in 1990 and reunited with her for the 2007 release of Real Time, of which the Philadelphia Daily News said, “Even Bonnie Raitt diehards would be impressed.” In 2012 the label released Pianoland, her “most rewarding and well-rounded yet,” according to the Washington Post. And Blurt magazine called the album “a masterpiece of blues healing. At times listening to this album is like listening to Coltrane or Monk for the first time.”

Over the course of her career, Deanna’s has developed an increasingly emotional force, and her songwriting has grown both in breadth of complexity and lyrical subtlety. A woman who has managed to balance single motherhood with the vicissitudes of life leading a successful band for over 20 years on the road has learned to create music that reflects a similar synthesis of the traditional and the non-traditional. Bogart is philosophical about striking out in new directions. "Nothing hurts creativity like safety" is her credo. "In art as in life, you can't have magic if you're not willing to risk the train wrecks." Addressing an increasingly broad range of personal subjects and life experiences, Bogart has become much more than a splashy, unforgettable performer - she has established herself as a unique artistic spirit.

Despite the power of her recordings, Bogart still loves performing live with her band. "Musicians play for 'one of those nights'. For me, that means the moment I'm at the place where all past and present, pain and joy, meet as one. For lack of a better term, I call it 'Deannaland'." And it's a place that both audiences and other artists, who value the eclectic diversity of her genre defying sensibilities and talents, never tire of visiting along with her.
4
What's This
Advertisement