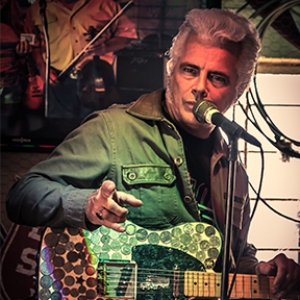 **This is an abridged version the album. All tracks with explicit content have been left off. For an entire version of the album including between song banter contact www.redhouserecords.com.**

Considered Austin, Texas’ official musical spokesman, Dale Watson has built a worldwide legion of fans one gig at a time, from Texas honky-tonks to Tokyo performance halls and all points in between. With his new album, Live At The Big T Roadhouse, Chicken S#!+ Bingo Sunday, Watson brings a unique Texas tradition to the world. Live At The Big T is a perfect snapshot of Watson and his ace band, His Lonestars, live in concert at the peak of their performing prowess, all while hosting a Chicken S#!+ Bingo show at Dale’s own bar, the Big T Roadhouse in St. Hedwig, Texas. The 'bingo" game involves a caged hen strutting across a plywood board divided into numbered squares while betting customers gather 'round the cage, hoping the bird will drop its mark on their chosen numeral. Along with cash prizes for the winners, there's $2 Lonestar beer, all you can eat hot dogs and live music and dancing. If you've never seen Watson live, this album is the next best thing -- an intimate show for an audience of mixed ages and backgrounds, all enjoying an afternoon of live honky tonk and classic country music framed by Watson’s hilarious between-song banter.

"This is 'A Day In The Life' of anyone who has ever gone to one of my Sunday shows," Watson says. "I hope you show up to a Chicken $#!+ Bingo show someday. You will go away with a warm feeling of why Texas is so great and why Ameripolitan Music is here to stay. In one word, it’s REAL."

Songs include a down and dirty version of Jerry Reed’s “Amos Moses” and Watson's version of Merle Haggard's barroom classic, "The Bottle Let Me Down.” Other Watson favorites include his unofficial theme song, “I Lie When I Drink (And I Drink a Lot),” “Honky Tonkers Don’t Cry” and his truck driving anthem, “I Gotta Drive.” And there's the crowd-pleaser “Where Do You Want It,” his tribute to outlaw musician Billie Joe Shaver; the title is the question a pistol-toting Billie Joe is said to have asked the man he was getting ready to plug. Watson fans will also recognize the band’s improvised “commercials” for Lone Star Beer (he won’t drink anything else, probably because it “whitens teeth” and is “the only beer proven to grow brain cells”).

Dubbed “the silver pompadoured, baritone beltin’, Lone Star beer drinkin’, honky-tonk hell raiser” by The Austin Chronicle, Watson is a veteran touring artist and consummate entertainer who is on the road more than 300 days a year. An outspoken proponent of classic honky-tonk for over two decades, Watson has christened his brand of American roots music “Ameripolitan” to differentiate it from the current crop of Nashville-based pop country. In 2014, he founded the Ameripolitan Awards in Austin each February to recognize the best in Honky-tonk, Outlaw Country, Rockabilly and Texas Swing music.

Watson has appeared on Austin City Limits (PBS), The Late Show with David Letterman (CBS), The Sun Sessions (PBS) and as a guest on NPR’s Wait Wait… Don’t Tell Me. He also joined Jimmy Kimmel’s house band as a guest on Jimmy Kimmel Live from SXSW (ABC) and he and the band performed on a Tex-Centric episode of The Bachelorette (ABC) featuring contestants learning the Texas two-step.
20
What's This
Advertisement