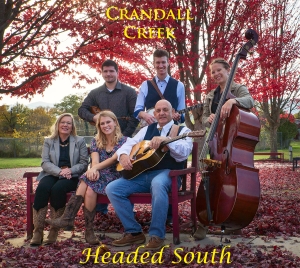 Tales of lost love, love of family and love of God are on Crandall Creek’s newest album, Headed South. The 11-song CD showcases the West Virginia-based band’s talent for telling Appalachian stories through bluegrass songs.
“The album has been a while coming,” says Crandall Creek founder Jerry Andrews. “But I’m really excited about each and every song.”
The album is a labor of love for Kathy Wigman Lesnock, vocalist.
“We have all worked incredibly hard to see this project come to fruition,” Kathy says. “I am grateful to every person seen and unseen who had a hand in this project. And I am filled with love for our entire band family.”
Several songs from Headed South made the bluegrass charts earlier in 2020.
Drivin’ Me Insane was released in March and stayed on the charts for more than six months. This Heart of Mine debuted at No. 1 in May. The Bean Song was released in the fall. By November The Bean Song and Drivin’ Me Insane were in the top 10 of the Bluegrass Today chart. The singles also appeared on The Bluegrass Jamboree chart.
Crandall Creek also donates to deserving charities through the Bluegrass Music Endeavors Foundation, a non-profit 501c3 set up by Jerry.
To download the Headed South album, go to crandallcreekband.com, Amazon or Spotify.
We hope you enjoy listening to the music as much as we enjoyed creating it.