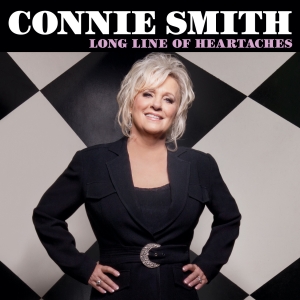 Dolly Parton once noted, famously, that there were just three real female singers around—Barbra Streisand, Linda Ronstadt, and Connie Smith. "The rest of us," she said, "are only pretending." It's less-well known that when Ms. Smith was introduced to Keith Richards, he grabbed fellow Connie Smith fan (and Rolling Stone) Ron Wood and brought him up to meet her, too, exclaiming "She's the real deal!"

What the singers she's been influencing for decades spot in Connie Smith's performances—besides her genius for phrasing, perfect diction and a vocal range which have all long been envied—is her fervent joy in singing itself, her love for the emotional and physical act of letting loose a song, which is as evident on her recordings as it is in front of audiences at the Grand Ole Opry, on RFD TV's weekly Marty Stuart Show, or on the road. In recent decades, the appearance of a new Connie Smith record has become a rare, much-anticipated event; Long Line of Heartaches, available August 23rd on Sugar Hill, is her first since 1996 and only her second since 1978, and her 53rd album to date. Still the urge to sing and share the joy she finds in doing it has never waned.

"I may have put off making a new record for quite a while," Connie says, "but I still love to sing just as much as I ever did. I really feel that it's my destiny; I heard the saying, one time, 'Do what God tells you 'til he tells you something else,' and He hasn't told me anything else yet. So I think I'll still be singing till I hear different!"

What she sings on this return to disc is the same broad range of traditional country moods, themes, rhythms and sounds that marked her remarkable run of hit records and classic country albums in the 1960s and '70s. Keeping that music alive, well and in the public ear was an important motivation in breaking this most recent recording hiatus:

"I feel so fortunate to have been introduced to Nashville in the early sixties. It was a magical time in country music; country artists were encouraged to bring their individuality and culture to the microphone, not to back away from them, and the songwriters of the era were just the best. But I feel that the music as it was has been slipping away—and much, much faster than I'm ready for. The only thing I know to do about it now is to keep singing what I've always loved."

Connie has always been the sort of singer who, much as Frank Sinatra did in saloon singer pop, emphasizes crediting the writers who created the emotionally direct songs she chooses to sing. Songs by songwriters she's long favored, including icons Bill Anderson, Harlan Howard, Johnny Russell, Kostas, and Dallas Frazier (whose "A Heart Like You" on this record was one of the first he'd written in 30 years, and the 69th Frazier song Connie's had on record) are featured on this new release. Her own songwriting, which had been something she'd found little time for early in her career, came more to the foreground when she began co-writing with Marty Stuart; five of their collaborations appear on Long Line of Heartaches, including the title track.

"I had written a few of the songs I and others had recorded over the years, but I'd never even begun to think I could write enough to do a whole album. Marty believed I could. We found other good songs, too; it can be a bad idea to only do your own songs. I don't cut a song because Bill, Harlan, Dallas or I wrote it, I cut it because I think it's the best song that I can find at the time."

The dozen potent songs of heartache, joy and spirit on this new collection attest to the strong instincts for what songs work and are right for her that Connie exhibits in making those selections, as well as her experience. She was a working collaborator with producer Bob Ferguson in choosing songs she'd record and the musicians who'd back her on the records throughout her now legendary run of recordings at RCA Victor in the sixties and seventies. The first nine years of albums in that run were recorded, nearly in their entirety, in the same celebrated (and for Connie, very comfortable) Nashville Studio B where she, with Marty as producer and Mick Conley as engineer, would record the tracks for Long Line of Heartaches.

"If I hadn't had Marty and Mick working with me, this record couldn't have happened like it did. When we got 5 of the songs Marty and I wrote coupled with the 7 great songs from other writers, we got serious and knew it was time to record. The songs had to come first. Then the work was just a joy.

A first-time occurrence on this album is the appearance of Connie's daughters Julie, Jeanne and Jodi with her, adding striking family harmonies to the contemporary hymn "Take My Hand." "My five kids all know every word to every one of my songs," Connie notes, "and we always sang at home. You'll hear that my daughters are really good; they just never had the desire to be professionals. Neither did my two sons, Darren and Kerry, who also sing well."

That Connie Smith always prioritized family life over career (and with no conflict about that, she notes) is one reason she may be better known in the households of long-time traditional country music lovers than some others. She'd taken a break from appearances and recording to raise those kids, and, as she puts it "never went back into business in full force," though she has been a much-loved mainstay at the Grand Ole Opry.

It is a Nashville legend that Connie's first record, the aching and unforgettable "Once a Day," written by Bill Anderson and recorded on July 16, 1964 when she was just 23, became one of the most celebrated singles in country music history—the first debut single by a female country singer to go to Number One, a position it held for eight weeks. Forty-seven years later it is still the only first single ever to have done that. When Connie sang "Once A Day" in the all-star B-movie musical Second Fiddle to a Steel Guitar the following year, she was introduced on-screen as "The Cinderella of Country Music." "Once A Day," and her stunning rendition of "How Great Thou Art" remain the two most requested songs by her fans to this day. Connie's memorable string of hits would include "You and Your Sweet Love" "If It Ain't Love" "Where Is My Castle?" "Run Away Little Tears" "Just One Time" and "I Never Once Stopped Loving You."

The passion for singing and for the songs, and the singular vocal precision in delivering them that marked those standards-to-be are fully on display in this return to recording. "If you add up all the songs on this album," Ms. Smith says, "it would add up to my personality. It's me talking again, after so many years, with a message no different than I've always had. It's just that I love you, and I want that love to come back."