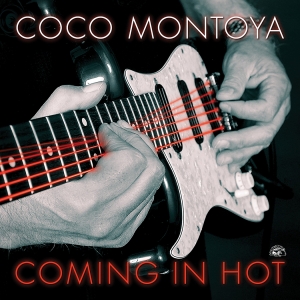 Click here to go to The Alligator Records Main Page
Between his white-hot guitar playing and his soulful, emotional vocals, Coco Montoya has talent to burn. In a career that spans almost four decades, he's gone from drumming for blues icon Albert Collins to holding the lead guitar spot in John Mayall's Bluesbreakers to leading his own band and touring worldwide. Montoya is revered for his ability to move from subtly melodic guitar playing to slash-and-burn pyrotechnics. Equally forceful are his deep, soul-baring vocals. Years of constant touring, playing unforgettable shows at clubs, concert halls and festivals, have earned him his position at the top of the contemporary blues world. And it all started with a chance meeting in the mid-1970s with legendary bluesman Albert Collins, who offered Montoya a spot in his band, where he stayed for the next five years. Coco was initially hired as Collins' drummer and later—with Albert mentoring him on the guitar—became the band's rhythm guitarist. A few years after leaving Collins' band, British blues star John Mayall heard Coco jamming onstage and was so impressed that he hired him for the newly reformed Bluesbreakers.

When Montoya launched his solo career in 1993, he already had an instantly recognizable burning-hot sound and style all his own. His debut album solidified his stature as the blues' newest rising star. Over the course of his nine previous solo albums, Montoya has consistently delivered piping hot blues, rock and soul. His new album (his fifth for Alligator), Coming In Hot, is another instant classic. Montoya's fiery, melodic guitar playing and passionate vocals fuel one memorable song after another. Guitar Player says Montoya plays "stunning, powerhouse blues with a searing tone, emotional soloing, and energetic, unforced vocals."

Henry "Coco" Montoya was born in Santa Monica, California, on October 2, 1951, and raised in a working class family. Growing up, Coco immersed himself in his parents' record collection. He listened to big band jazz, salsa, doo-**** and rock 'n' roll. His first love was drums; he acquired a kit at age 11. He got a guitar two years later. "I'm sure the Beatles had something to do with this," Montoya recalls. "I wanted to make notes as well as beats." But guitar was his secondary instrument. Montoya turned his love of drumming into his profession, playing in a number of area rock bands while still in his teens and eventually becoming an in-demand drummer.

In 1969, Montoya saw Albert King opening up a Creedence Clearwater Revival/Iron Butterfly concert at the Shrine Auditorium in Los Angeles. He was transformed. "After Albert got done playing," says Montoya, "my life was changed. When he played, the music went right into my soul. It grabbed me so emotionally that I had tears welling up in my eyes. Nothing had ever affected me to this level. He showed me what music and playing the blues were all about. I knew that was what I wanted to do."

Then fate took over. In the early 1970s, Albert Collins was booked to play a matinee at the same small club in Culver City, California, where Montoya had played the night before. The club owner gave Collins permission to use Montoya's drums. Montoya continues the story: "I show up to pick up my equipment and I see that someone had been playing my drums and I got a little angry with the club owner. So Albert called me up at the club and was real nice and apologetic. I went down to see his show and it just tore my head off. The thing that I had seen and felt with Albert King came pouring back on me when I saw Albert Collins."

A few months later, Collins desperately needed a drummer for a tour of the Northwest and he called Coco. During the tour, Albert took Montoya under his wing, teaching him about blues music and life on the road. After the tour ended, Montoya remained in the band for five more years. It was during this time that Coco began doubling on guitar. And Albert went out of his way to teach him. "We'd sit in hotel rooms for hours and play guitar," remembers Montoya. "He'd play that beautiful rhythm of his and just have me play along. He was always saying, 'Don't think about it, just feel it.' He was like a father to me," says Coco, who often crashed at Collins' home. When he declared Montoya his "son," it was the highest praise and affection he could offer. In return, Montoya learned everything he could from the legendary Master of the Telecaster.

In 1984, John Mayall needed a guitarist for the newly reformed Bluesbreakers. Hearing Coco at a jam session, he was blown away, and offered Coco this prestigious spot in his legendary band. Filling the shoes of previous Bluesbreaker guitarists Eric Clapton, Peter Green and Mick Taylor would not be easy, but Montoya knew he could not pass up the opportunity to play with another blues legend. For the next ten years he toured the world and recorded with Mayall, soaking up the experience of life on the road and in the recording studio. Along with fellow Bluesbreaker guitarist Walter Trout, Montoya was a featured member of the band, and often opened shows with his own blistering blues.

By the early 1990s, Montoya struck out on his own. His debut as a leader, 1995's Gotta Mind To Travel (originally on Silvertone Records in England and later issued in the USA on Blind Pig Records), became an instant fan favorite. Blues fans, radio programmers and critics sent praise from all corners. The album immediately made it clear that Montoya was a guitarist and vocalist who ranked among the best players on the contemporary blues scene. In 1996, he won the Blues Music Award for Best New Blues Artist. Two more Blind Pig albums followed, and Coco was well on his way to the top of the blues-rock world.

In 2000, Coco's Alligator debut, Suspicion, quickly became the best-selling album of his career, earning regular radio airplay on over 120 stations nationwide. Montoya's fan base exploded. After two more highly successful and massively popular Alligator releases—2002's Can't Look Back and 2007's Dirty Deal—Montoya signed with Ruf Records, cutting both a live and a studio album. Returning to Alligator with 2017's Hard Truth, Montoya delivered another fan and critical favorite. "Montoya unleashes one career-topping performance after another." declared Blues Matters, "the music immediately ranking among the best he's ever recorded."

Now, with Coming In Hot, Coco Montoya again turns the burners to high and cooks from start to finish. Still an indefatigable road warrior, Montoya continues to tour virtually nonstop, bringing audiences to their feet from New York to New Orleans to Chicago to San Francisco. Across the globe, he's performed in countries including Australia, Belgium, Switzerland, Germany, Norway, England, Brazil, Argentina, Spain, Mexico, Ecuador, Italy, Poland, Russia, the Czech Republic and Canada. According to Living Blues, "Montoya is a show-stopper...heartfelt singing and merciless guitar with a wicked icy burn...he swings like a jazz man and stings like the Iceman, Albert Collins. He is one of the truly gifted blues artists of his generation."