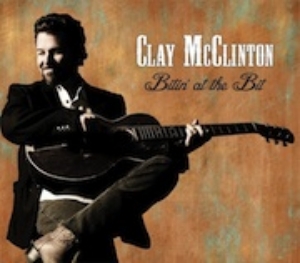 Clay McClinton’s musical roots are firmly planted in the traditions of his Texas birthplace, where strains of country, blues, rock ’n’ roll and Tex-Mex blend effortlessly into a sound he likes to call “Texas gumbo.” After spending 10 years diligently honing his own version of that sound, McClinton showcases his range as an artist and writer on his fourth and most ambitious album, Bitin’ at the Bit (Red Chili Records; Feb. 18, 2013).

Nicholson and McClinton co-wrote most of the album’s tracks, and share writing credit for “Stories We Can Tell” with McClinton’s dad, Delbert. That trio also collaborated with legend Bruce Channel (“Hey Baby”) on the rollicking “Beer Joint.”

Nashville hit maker and drummer Tom Hambridge and Austin-based performer George Ensle joined in on other tracks, rounding out an album full of deeply personal songs that also carry universal appeal. The proof is in his growing fan base: His soul-driven delivery and genuine presence earn him new converts everywhere he plays (not to mention generous support; fans’ Kickstarter donations funded the album).

As a kid, McClinton had no idea he’d choose a music career. But he knew enough to pay attention when his dad got together with his musical pals, who happened to include fellow Grammy winners Bonnie Raitt, Kris Kristofferson, Willie Nelson and the late Stephen Bruton, as well as Nicholson. The years McClinton spent on his dad’s tour bus also left their mark, but even though the occasional vocal inflection or chord change might suggest his dad’s influence, McClinton’s musical identity is distinctly his own.

In 2003, he moved to Nashville to record his first album, 2004’s Out of the Blue, which he co-produced, along with writing or co-writing every song. After another three years on the road with the Clay McClinton Band, he released 2006’s Son of a Gun, co-produced with Kevin McKendree (Delbert’s 1997-2011 right-hand man); it made indie-music.com’s year-end top 25 list.

McClinton and his wife/manager Brandy Alan, whom he met while living in Flagstaff, Ariz., moved to Dripping Springs, outside of Austin, in 2007. He honed material for 2010’s Livin’ Out Loud on some of the area’s most legendary stages, including Gruene Hall, the Saxon Pub (Bruton’s beloved home) and Dallas’ Granada Theater. He also built the current Clay McClinton Band, forging “a family of guys I’m honored to share the stage with”: “bass whisperer” Ed Friedland, drummer Jim Starboard and guitarist Jon Sanchez.

McClinton has been honored to share stages with many talented artists; his memories are filled with experiences such as his New Year’s Eve 2014 mini-reunion with Delbert, half-sister Delaney and Nelson and family at Austin’s ACL Live at the Moody Theater.

Except now, everyone’s onstage. Both musical icons gave their kids the best training any musician could have, though they also made sure their offspring earned that shared stage time. And McClinton has worked hard to cultivate his own sound and style.

In “The Sound of a Small Town,” McClinton gently evokes the fading simplicity of small-town life. “Nobody Knows My Baby,” an upbeat blues-rock shuffle, is a love song with a catchy sing-along hook, while the romping two-stepper “Hydrated” extols the benefits of a well-balanced fluid intake. It pairs well with “Beer Joint,” both of which feature guitar by ace Nashville slinger Kenny Vaughan.

“Victim of Life’s Circumstances,” the Delbert-penned title track from his 1975 ABC Records debut, is a honky-tonker with chicken-pickin’ by Guthrie Trapp and father and son sharing vocals. Their “Stories We Could Tell” is a revved up rocker that laughs at the misfortunes of life on the road. McClinton’s contemplative “Bound for Glory” offers an emotional, from-the-heart tribute to the great Woody Guthrie. And “A Woman That Can’t Be Explained,” done as a classic country waltz, plaintively explores the quixotic realm of the feminine psyche.

He also revisits “What a Little Bit of Love Can Do,” co-written by Nicholson and Bruton and sung by “Crazy Heart” start Jeff Bridges on his self-titled solo album. McClinton gives it a Doug Sahm/San Antone vibe, with Guzman’s squeezebox adding more Tex-Mex flavor.

Speaking of Bridges, McClinton coincidentally (though unintentionally) makes another “Big Lebowski” connection with his take on the ’60s hit “Just Dropped In (to See What Condition My Condition was In),” which appears in that film. A mainstay of his live shows, McClinton gave the song a total makeover in the studio, drawing elements from the groovy hit version by Kenny Rogers & the First Edition.

The Clay McClinton Band is now bitin’ at the bit to hit venues everywhere and share the new material. They’ve already appeared at festivals, concert halls and clubs from Colorado to Finland, where they deliver their uniquely flavored Texas gumbo with fire and honesty — and a forceful presence that stands on its own.