Circa Blue - Footprints in a Song 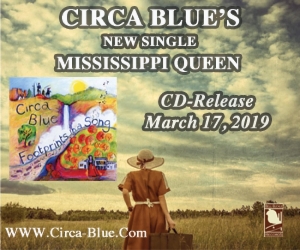 Circa Blue’s "Footprints in a Song" and "Mississippi Queen" for upcoming Bell Buckle Record's CD Release on March 17th.

Valerie Smith of Bell Buckle Records says, "I saw them perform some of these tunes at a festival this summer and I really liked the songs and arrangements, the band has an authentic sound that is driving this industry to a new direction, I wanted to be a part of that experience".

The much anticipated CD release “Footprints in a Song” will be March 17th of 2019. Circa Blue has teased their audience with two singles, “Footprints in a Song” written by Mark “Brink” Brinkman and Peter McLaughlin. The song kicked off the concept of the project, honoring the songs and experiences that the lyrics bring you throughout the listening of the CD. Then, Circa Blue surprises us with a show stopping tune, "Mississippi Queen"! I sizzles and is a favorite amongst people that love foot stompers. The instruments are energized and the vocals are smooth.

Bell Buckle Records has released a single just to get you excited about what is to come!

Multiple instrumentalist Steve Harris, the founder of Circa Blue, plays guitar and offers his rich lead vocals and harmonies to the sound of Circa-Blue’s music. Ryan Mullins plays the mandolin and also shares the vocal responsibilities, singing both lead and harmonies. Matt Hickman is a talented, self-taught banjo player who followed in his grandfather’s footsteps by playing clawhammer banjo style and later learned the three finger style when introduced to Earl Scruggs’ music. Jacob Bly plays bass and provides harmony vocals.

Three guests on the CD should be familiar to Circa Blue fans. From their 2015 chart topping “A Darker Blue” CD Chris Sexton (fiddle and piano), Gaven Largent (dobro), and former band mate Ron Webb (vocals on two songs) were invited back to offer their incredible talents. Con Burch (harmony vocals on two songs) and Bill Vaughan (piano “It's a Beautiful Day”) round out the esteemed guest artist list.

The CD was recorded at National Media Services in Virginia and was produced by Steve Harris.

It's a Beautiful Day
Jim Hurst

Working on a Building
A.P.Carter

Bury Me Beneath the Willows
Public Domain

House of the Rising Sun
Public Domain
21
What's This
Advertisement