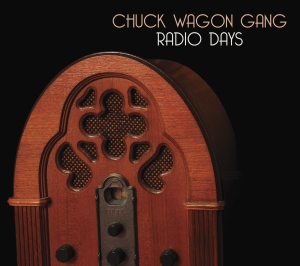 Though they’ve been a touring group for well over half a century, the Chuck Wagon Gang’s career began on radio, and the then-booming medium was indispensable in introducing the original Gang to an audience that rapidly grew from a handful of listeners into the hundreds of thousands. Sponsored by flour producer Bewley Mills, their music filled the late 1930s airwaves well beyond Texas, thanks to the power of Ft. Worth’s 50,000 clear channel powerhouse, WBAP.

In a tip of the hat to their roots, the Gang have regularly devoted a portion of their performance to recreating the golden era of their radio days — and now, as their performance schedule begins to pick up anew, the group has finally brought the popular segment into the Mountain Home Music Company studio. The result is Radio Days, a collection that expands the vintage experience into a full-length recording, bookended by a handful of new recordings that serve the Chuck Wagon Gang as well on today’s radio as the renewed songs did for them in days gone by.

For those who know today’s Chucks as a group devoted exclusively to gospel songs, the set holds a surprise, for during their earliest years, the original Chuck Wagon Gang — renamed from the Carter Quartet when they made the move to WBAP — sang a wide variety of songs, represented here by the western-themed “I Want To Be A Real Cowboy Girl” and the charming “Take Me Back to Col-Ler-Rad-Da Fer to Stay.” The remainder are drawn largely from the group’s many recordings from the 1940s and 1950s, fitting easily into the good-humored re-enactment of a typical show that includes sponsor jingles, station IDs and even “Dad Carter’s Thought For The Day,” a long-time signoff concept for the show. And, not surprisingly, the new songs, including the hit single “I’ve Just Seen the Rock of Ages,” segue seamlessly into and out of the album’s central element.

"Fans have inquired for years if we had the old radio show on CD,” says the Chuck Wagon Gang’s leader, Shaye Smith. “I am so excited to have this CD to present to them! We've given quite an effort to 'duplicate' the original Bewley Mills radio programs from the 1930's-1950's. I hope those who listen can envision families from those by-gone days sitting in their living rooms, gathered around the old battery powered radio, listening to the Chuck Wagon Gang at noon after a hard day's work in the fields! This is truly a reflection of who we, as the Chuck Wagon Gang, truly are. We are proud and humbled by our history and hope fans will feel they know us a little better after listening to this new recording."

About the Chuck Wagon Gang
Although the Chuck Wagon Gang has been around since 1936 — undergoing many personnel changes over the years — its sound and devotion to old-fashioned gospel has remained much the same. Their greatest significance is that the band provides an important link between country music and traditional sacred songs of the South. This music has moved Johnny Cash, Merle Haggard, Charlie Daniels, and generations of gospel singers and open-eared listeners. For more than 80 years, the Chuck Wagon Gang has offered hope and harmony, faith and family and is now in its third generation.