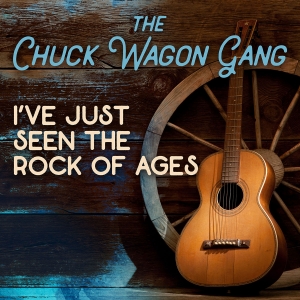 For their first single since the Dove Award-nominated No Depression In Heaven: The Gospel Songs of the Carter Family, Mountain Home Music Company’s Chuck Wagon Gang has turned to the world of bluegrass music for a somber, yet ultimately uplifting classic, “I’ve Just Seen The Rock Of Ages.”

First released over 40 years ago by Bluegrass Hall of Famer Larry Sparks, and soon after by the legendary Ralph Stanley (with a young Keith Whitley singing lead), the song — written by John B. Preston while he was in solitary confinement during one of the several times he was incarcerated — quickly became a favorite for its haunting, mournful melody and stark, direct lyrics that capture both the sadness of loss and the promise of eternal life.

"In choosing the music for our new record, we ran across this old song used mostly in Bluegrass circles,” says the Chuck Wagon Gang’s Shaye Smith. “2020 has dealt the Chuck Wagon Gang multiple blows of death to immediate family members — especially relating to Stan [Hill] and I, as we both lost our Moms this year — so this song really hits home for us. But we know we are not alone, as so many have experienced loss in 2020. We pray that the message of this song will be an encouragement to all those who will hear it. May the lyrics remind us all that the loss of a Christian mother (or family member) has an assurance that as they 'cross the River of Jordan' they will be 'homeward bound.'"

With its spare instrumental backing, the Chuck Wagon Gang’s approach to “I’ve Just Seen The Rock Of Ages” gives the enduring number a new and distinctive dimension, focusing attention on Hill’s hushed, emotive lead and sweetly innovative harmonies from the rest of the quartet — and just as with their acclaimed interpretation of the Carter Family’s gospel songbook, the group blends echoes of treasured past performances with a new arrangement to create a compelling performance that is unmistakably theirs, and theirs alone.

About the Chuck Wagon Gang
Although the Chuck Wagon Gang has been around since 1936 — undergoing many personnel changes over the years — its sound and devotion to old-fashioned gospel has remained much the same. Their greatest significance is that the band provides an important link between country music and traditional sacred songs of the South. This music, has moved Johnny Cash, Merle Haggard, Charlie Daniels, and generations of gospel singers and open-eared listeners. For more than 80 years, the Chuck Wagon Gang has offered hope and harmony, faith and family. Now in its third generation, the Chuck Wagon Gang features alto singer Shaye Smith, tenor singer Stan Hill, soprano singer Melissa Kemper and guitarist and bass singer Karl Smakula.