Chris Ruest- Been Gone Too Long 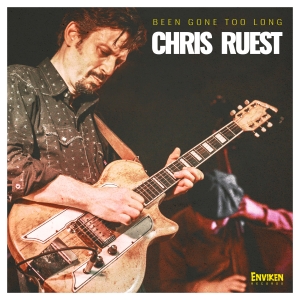 
In 1999, Chris Ruest moved from the northeastern United States to Texas, where he soon began working with the top talent in Dallas and Austin, and cultivated solid connections to Texas blues and rock and roll history through friendships with Sam Myers and Ray Sharpe. Since 2005, the Texas-based artist has released three solo CDs, featuring performers including Hash Brown, Nick Curran, Preston Hubbard, Ronnie James, and Kaz Kazanoff. Those albums, and his contributions to the all-star group Texas Cannonballs, reveal one of the strongest, most original voices in contemporary blues and roots rock. In 2017, Ruest recorded the impressively real and raw blues project It’s Too Late Now, with a trio rounded out by the storied Gene Taylor on piano and Brian Fahey (The Paladins) on drums.

Been Gone Too Long is Chris Ruest’s first truly international project. The new album taps into the rich network of connections the guitarist-singer-songwriter developed during his many tours of Europe, where he has played frequently as a headliner, with the Cannonballs, and as part of a revue paying tribute to the late Gary Primich. Three years ago, Enviken Records’ owner Patrik Staffansson attended one of Ruest’s shows in the company of American country-rockabilly songstress Marti Brom and her Swedish touring band. Ruest remembers that Staffansson “asked me if I’d be interested in playing on a few Marti Brom tracks” at his studio. During that session, Staffansson saw potential in cutting a record with Ruest.

Fast forward to 2017 and another trip to Sweden, when Staffansson brought Ruest together again with Mattias Hyttsten (drums) and Peter Fröbom (bass). “They are a great rockabilly backing band, with an almost Howlin’ Wolf feel. I geared a few songs toward that and just let the guys play what they felt, and they kicked ****. They are big fans of Nick Curran and my CDs, so they knew the style and sounds I was looking for.” The fabulous piano playing belongs to the storied Gene Taylor, a citizen of the world. Among the other musicians on Been Gone Too Long is Knock Out Greg, one of Sweden’s premier bandleaders and a touring partner of Ruest’s from the Primich tribute, on harp. Austrian native Christian Dozzler, a longtime Texas resident and friend of Ruest’s, plays accordion on the Gulf Coast-style rocker, “Henhouse To The Doghouse.” If “Henhouse” sounds a bit like a lost Rockpile tune, it’s because Billy Bremner plays guitar on it. (Ruest met the Scottish great at the band house maintained by his Swedish promoter.) Marti Brom, who happened to be in the studio, blows the top off of the Jimmy Reed-inspired “Get Your Mind Out Of That Gutter,”, John Lindberg one of Swedens premiere Rockabillies whom is a regular at the Enviken Studio dropped by and layed down some real cool guitar on ”Nobody Cares” and even a bassline on the aforementioned ”Henhouse” and Wes Race, Fort Worth, Texas’s preeminent hipster, raps over the funky grind of “Jivetalk.”

Been Gone Too Long extends Ruest’s winning formula for making outstanding blues records: Guitar playing that ranges from savage to sophisticated, honest vocals, and a lockstep connection with the band that gives the set power, finesse, and a fine-tuned dynamic range. The program offers a couple of fresh covers–Guitar Slim’s “Sufferin’ Mind,” reimagined as an intense Elmore James number, and Arthur Alexander’s timeless “The Girl That Radiates That Charm”–and a host of incisive original songs: the swinging “Real Proud Papa”; “Too Cool For School,” with its big, Bo Diddley beat; the Latin-tinged “Nobody Cares”; the Wolf-like stomp “I’m Going Home”; the rocking “I Quit”; “Can’t Take No More” and “True Found Baby,” which acknowledge B.B. King’s early sides; and the slow drag of the title track. The essence of blues tradition past, present, and future, is in good hands with Chris Ruest.