Chris Jones & the Night Drivers - Whither You Roam [Sin 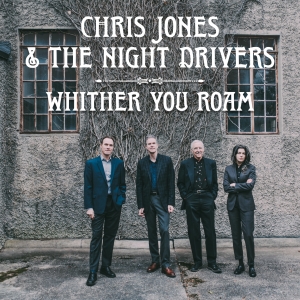 Few bluegrass artists have spent as much time touring outside the United States as frequently as Chris Jones and the Night Drivers, so it should come as no surprise when travel — and the musical influences it can bring — emerges as a theme in his songs. Sure enough, that’s the case with the group’s latest single for Mountain Home Music Company, “Whither You Roam.”

The latest in a long line of Jones recordings — both originals and thoughtfully-chosen covers — that invoke images and narratives of departure and destinations, sailing ships, railways and roads, “Whither You Roam” is unusual in making the journey it depicts a partnership in which the narrator is more the companion than the adventurer: “Across the sea or in the deepest hollow, Through the fog or clearest desert morning, Whither you roam I will roam along.”

“This is the first song I completed after the start of the pandemic,” notes Jones, “which may be why it’s a traveler’s love song during a time when we can’t travel. The word ‘whither' has an old world feel to me, and though it’s musically pretty straight ahead bluegrass, there’s a little bit of old world influence in the song from the year I spent in Scotland a few years ago. In that case my wife ‘roamed' there to study and I followed.”

Indeed, an alert listener will detect the fingerprints of that influence in lines like “The sun is out, the dew is on the barley” and “let the highway take us where it will,” as well as in transatlantic touches found in the song’s folk-flavored melody, even though it’s underpinned by the characteristic bluegrass drive of the Night Drivers’ mandolin (Mark Stoffel), banjo (Grace van’t Hof) and bass (Marshall Wilborn).

“It’s like fine wine for the ears,” Americana music icon Jim Lauderdale once said of Jones’ expressive baritone voice. Framed by the simple yet memorable chorus that opens and closes the song, “Whither You Roam” is a performance rich with the tasteful yet energetic musicianship that’s been an integral part of the group’s sound since Jones created it a quarter of a century ago.

About Chris Jones & The Night Drivers
Whether it’s in the studio or on stage, Chris Jones & The Night Drivers are making some of the most distinctively elegant yet driving music to be heard anywhere today, and they’re delivering it with a unique blend of dry wit, emotional authenticity and broad humor that’s won the loyalty of a growing number of fans across the country, from MerleFest in North Carolina to California’s Huck Finn Jubilee, and around the world.

Steve Martin referred to the Night Drivers as “. . . some of the best players in bluegrass! Chris Jones’ voice is there with the great masters.” Americana artist Jim Lauderdale said of Chris, “He continues to have one of the most distinctive and best voices in music, period.”
The band — which is Mark Stoffel on mandolin, Grace van’t Hof on banjo and ukelele and Marshall Wilborn on bass — is led by Chris’ soulful lead-singing, songwriting, and solid rhythm and lead guitar. Chris boasts extensive performance credits as a sideman with artists like Lynn Morris, Vassar Clements, Special Consensus, Dave Evans, Earl Scruggs, and the acclaimed Irish band The Chieftains.

Altogether, members of Chris Jones & The Night Drivers have won more than a dozen IBMA awards and have recorded more than ten #1 songs. The Night Drivers also bring name recognition in related fields, as bluegrass fans are well-familiar with Jones for his award-winning work as a SiriusXM DJ, on both Bluegrass Junction and Willie’s Roadhouse.