Chris Jones and the Night Drivers - Make Each Second La 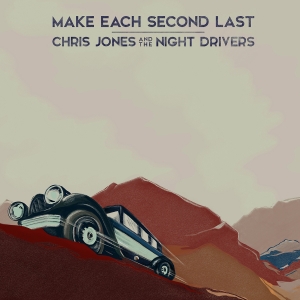 He’s been called a singer-songwriter who happens to front a bluegrass band, and though the choice is a little more deliberate than that phrase might suggest, there’s still a nugget of truth in the observation, and it arguably applies more than ever to the music on Make Each Second Last, the newest full-length release from Chris Jones and the Night Drivers, out October 15th on the Mountain Home Music Company label. Filled entirely with material written by Jones and a handful of collaborators that includes both former and current Night Drivers, it’s the veteran artist’s most original and most varied outing yet — and one that, for good measure, introduces two new members of the ensemble.

Given Jones’ hit making track record, it’s no surprise that the first four singles from the album have already reached #1 on Bluegrass Today’s airplay chart. The title comes from “We Needed This Ride,” the first of those to introduce new members Grace van’t Hof (banjo, ukuleles, accordion, vocals) and Marshall Wilborn (bass, vocals) and, with its thrumming baritone ukulele-driven rhythm, a sign that the band would be serving up a broader range of tones and textures than before. Sure enough, the group’s latest single, “Riding The Chief,” goes still further, with its western swing foundation — right down to the twin mandolins, “sock” style guitar and tasteful fiddle from ace session player David Johnson — reintroducing a sound Jones hadn’t brought into the studio in decades.

Yet while the Night Drivers’ tonal palette might have expanded, there’s no doubt that Make Each Second Last is a Chris Jones album, focusing prodigious songwriting talent on enduring Jones themes that encompass more than the usual bluegrass subjects. There are takes on travel, from “We Needed This Ride” to “Whither You Roam” to “Riding The Chief,” lost love (“Quiet Click”) and life at home (“Leave It At The Gate”) and abroad (“Silver City”), but there are also meditations on less intimate matters, whether it’s the encouragement to speak one’s mind in “We Need To Hear From You,” the compelling observation of “Everybody’s Got A Line” or the compassionate consideration of common humanity in “They’re Lost Too” and cautious, almost wistful hopefulness of “Bed Of Snow.” Whether written with GRAMMY nominee Thomm Jutz, frequent collaborator Jon Weisberger, new colleague van’t Hof, veteran mandolinist Mark Stoffel — that would be the album’s lone instrumental, “Groundhog’s Retreat” — or by Jones himself, there’s not a song or performance in the collection that doesn’t bear Jones’ indelibly distinctive stamp.

With each of the albums he and the Night Drivers have made for Mountain Home — Run Away Tonight (2015), Made To Move (2017), and The Choosing Road (2019) — Chris Jones has dug deeper into a deeply personal synthesis of unique sounds, compelling themes and world-class songcraft, all embedded in a recognizably bluegrass setting, creating a sound whose appeal reaches far beyond the world of bluegrass while remaining firmly grounded within it. On Make Each Second Last, he serves notice that the journey continues.

“Make Each Second Last isn’t so much a departure for us, but a stretching of boundaries, and a fuller embrace of what makes us unique as a band, including some of the instrumental and vocal versatility brought in by new band members Grace van’t Hof and Marshall Wilborn. Mark Stoffel’s instrumental presence and creativity, always important to the Night Drivers’ sound, is also given an even bigger spotlight than on past releases,” says Jones. “This is our first record in which I’ve written or co-written all of the songs. The majority of the songs were solo writing efforts, or co-written within the band. I also wrote two with Thomm Jutz, which was really rewarding, and I’m also very glad to maintain my long co-writing relationship with former band mate Jon Weisberger, who co-wrote two of the songs.”

“The phrase ‘make each second last’ from the opening track ‘We Needed This Ride’ is all about savoring and being grateful for our experiences,” Jones continues, “especially those involving human contact, now that we know how much of that we had been taking for granted.”

About Chris Jones & The Night Drivers
Whether it’s in the studio or on stage, Chris Jones & The Night Drivers are making some of the most distinctively elegant yet driving music to be heard anywhere today, and they’re delivering it with a unique blend of dry wit, emotional authenticity and broad humor that’s won the loyalty of a growing number of fans across the country, from MerleFest in North Carolina to California’s Huck Finn Jubilee, and around the world.

Steve Martin referred to the Night Drivers as “. . . some of the best players in bluegrass! Chris Jones’ voice is there with the great masters.” Americana artist Jim Lauderdale said of Chris, “He continues to have one of the most distinctive and best voices in music, period.”
The band — which is Mark Stoffel on mandolin, Grace van’t Hof on banjo and ukelele and Marshall Wilborn on bass — is led by Chris’ soulful lead-singing, songwriting, and solid rhythm and lead guitar. Chris boasts extensive performance credits as a sideman with artists like Lynn Morris, Vassar Clements, Special Consensus, Dave Evans, Earl Scruggs, and the acclaimed Irish band The Chieftains.

Altogether, members of Chris Jones & The Night Drivers have won more than a dozen IBMA awards and have recorded more than ten #1 songs. The Night Drivers also bring name recognition in related fields, as bluegrass fans are well-familiar with Jones for his award-winning work as a SiriusXM DJ, on both Bluegrass Junction and Willie’s Roadhouse.
42
What's This
Advertisement