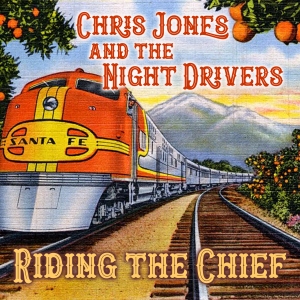 Why You Should Care: Whether it’s in the studio or on stage, Chris Jones & The Night Drivers are making some of the most distinctively elegant yet driving music to be heard anywhere today, and they’re delivering it with a unique blend of dry wit, emotional authenticity and broad humor. Altogether, members of Chris Jones & The Night Drivers have won more than a dozen IBMA awards and have recorded more than ten #1 songs. Their four most recent singles “We Needed This Ride,” “Leave It At The Gate,” “Quiet Click” and “Whither You Roam — all featuring the current line up of Jones, Mark Stoffel, Marshall Wilborn and Grace van’t Hof — have all reached No. 1 on the Bluegrass radio charts.
________

It’s been a while since he last flexed this particular musical muscle in the studio, but Chris Jones has long had an affinity for acoustic swing music. That — and the song’s roots in his personal history — makes “Riding The Chief,” the new Mountain Home Music Company single from Jones and his band, the Night Drivers, a bit of a homecoming.

“This was my first co-writing effort after the start of the pandemic,” Jones reveals. “Thomm Jutz and I wrote this while over 2000 miles apart via FaceTime, after I told him the story. I thought the western swing-feel suited the geography of the journey.”

“It’s an autobiographical song,” he goes on to say. “When I was a kid, my parents lived at other ends of the country, and starting in my early teens, I took the train to New Mexico to spend summers and sometimes Christmas holidays with my dad and family. I loved everything about these trips and they made a huge and lifelong impression on me. Between Chicago and Albuquerque, the train was the old Santa Fe Super Chief, which by then was operated by Amtrak, now called the Southwest Chief. Though I got off in Albuquerque, the train continued to LA and had been the main train route between those cities since the 1930s, originally operated by the Atchison, Topeka, and Santa Fe railroad. It’s still running.”

With its relaxed sway, its deftly written catalog of the journey’s waystations (and a regular infusion of details to characterize them) and, most of all, Jones’ warm, low-pitched vocal to deliver it, “Riding The Chief” is a satisfying slice of Americana that puts a distinctive new entry in the “train song” chapter of the bluegrass songbook.