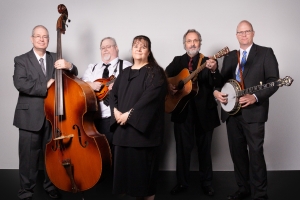 The Chigger Hill Boys & Terri switched record labels in 2018 after some 16 years of association with Thoroughbred Records. Gary Walker, founder of The Great Escape Records and Comics stores chain, had revived the Great Escape Records label in 2017 and The Chiggers, who were longtime associates of Walker, chose the label for their next studio recordings.

"When the group signed with our label a year or so back, my expectations were high,” Walker commented recently. "After all, they came with a history of great songwriting, and they'd already produced a significant number of successful records, including four Number One hits.” For their first single, Walker chose a new song written by Mike Richards, who plays mandolin when they perform; Terri Argot Gore, female vocalist; and her husband, upright bass player Ricky Gore. Joining bandmates Jim Britton (guitar and banjo) and Bobby Stangenberg (guitar), and adding fiddle virtuoso, Andy Leftwich to the lineup, they recorded "Songs Like Those (For Days Like These)” at Greg Cole's studio, The Cole Mine.

"We all knew we had something special when we heard the final mix," Walker continued. “It's a feel-good song that's hard not to sing along with and we decided this could be the record that might expand the group's listener base. But we were still amazed at the immediate impact it had in Bluegrass and Southern Gospel markets. Released September 30, 2018, it jumped into Singing News magazine's Bluegrass charts at Number Five in its December issue and topped the same chart in the magazine's May 2019 issue. Meanwhile, Sirius XM radio programmed the recording in regular rotation on its Enlighten channel {Southern Gospel} as well as Bluegrass Junction. Listeners to other radio stations playing Southern Gospel were also requesting the record; it was listed in a number of media charts reflecting plays in this genre, and made it to Number One on one. 'Songs Like Those...' also began showing up on Country Music radio play lists, a first for the group, and the label’s goals for expanding The Chiggers listeners base were making progress.”

But the fact that most amazed record company executives was the single's longevity. A full year after its release, it has maintained regular rotation status on a large number of stations, as evidenced by its listing as Number Five on one of last month's Bluegrass Today charts.

After several delays, the company scheduled a follow-up to the single; "Lonesome Mountain" was released on October 1. Walker believes this song, also composed by Mike Richards and Terri Argot Gore with Tim Webb, has potential for plays wherever any type of roots music is heard (Country, Folk and Americana, etc.) and will service stations who feature these genres of music, while still maintaining focus on Bluegrass and Gospel markets.

Walker believes the Hendersonville, Tennessee based group's greatest strength is their songwriting expertise. Richards was a successful writer of both inspirational and secular music prior to starting the band. He earned a Dove award in 1999 for "He Still Looks Over Me," a song he wrote with Rodney Lay, Jr., recorded by the Lewis Family. He and Lay, Jr., also co-wrote their first three chart-toppers for the band, "Face To Face (With Amazing Grace)," "Are You Praying Hard (Or Hardly Praying)," and "First Steps In A New Direction" (along with Terri Argot Gore and Ricky Gore).

Female vocalist Gore was the top contributor for the new CD, as far as songwriting goes. She co-wrote three of the songs with Richards and was solo writer on three more. Richards co-wrote four of the selections.

Bluegrass great Darrin Vincent joins Gore for a duet on "There's More Where That Came From," a Richards/Gore creation. Guest artist and Southern Gospel standout, Ben Rochester, assists the vocalist on a song co-written by Jerry Salley, Tony Phipps, and Garry Tyree, "What Love Looks Like To Me." The CD also includes a remake of "Face To Face (With Amazing Grace)."

If you're curious as to how the band's name came about, here's a quote from Mike Richards: “Yes, there really is a Chigger Hill! It's in Burkesville, Kentucky, the ancestral home of my father's family for more than 100 years. Right there at the foot of Chigger Ridge is Jones Chapel United Methodist Church, a little country church that has stood for more than 100 years. It is a beautiful, small, simple building where in the quiet you can hear the faint echoes of long-ago fervent prayers or beautiful old traditional hymns. Bill Monroe often spoke of these long-forgotten echoes. He referred to them as the 'Ancient Tones.' I heard these 'tones' at tent meetings, porch pickings and various other settings in my youth. This was the influence I brought to The Chigger Hill Boys & Terri.”

Production Information:
Produced by The Chigger Hill Boys & Terri
Recorded at The Cole Mine, Engineered by Greg Cole

1. Songs Like Those (For Days Like These)
2. Lonesome Mountain (Album Cut)
3. There's More Where That Came From (feat. Darrin Vincent)
4. There's A Record Book
5. God Is
6. What Love Looks Like To Me (feat. Ben Rochester)
7. Face To Face With Amazing Grace
8. Because He Loved Me
9. Tell The World That Jesus Saves
10. Keep My Eyes On Calvary


The Chigger Hill Boys & Terri formed in late summer of 2001, originating in the Hendersonville, TN area. Mike Richards and Terri Argot Gore, began writing songs together earlier that year when Mike commented on Terri's bluegrass-sounding voice. He asked if she would be interested in putting a group together and entering the Cumberland River Bluegrass Festival band competition in Burkesville, KY. The group needed a name and because of Mike's family roots in that area, they derived the name from a place called Chigger Hill, where his family used to gather to play music.

The rest of the band, Ricky Gore, Rodney Lay Jr. and Tom Fuzzy Hughes, were brought in to record a five-song CD (in Terri’s living room) and prepare for the competition. At the festival, the group sold enough copies of the five-song CD to buy gas to get back home and took 4th place in the band competition.

The band’s first single and #1 hit came from that EP; "Face To Face With Amazing Grace" began receiving airplay and climbed to #1 on the Christian Country Music Charts in early 2002. The band signed a recording contract with Thoroughbred Records, a division of Daywind Music Group in early 2002. After nearly 17 years with Thoroughbred Records, the group has recently signed with Great Escape Records out of Nashville, Tennessee.

Now nearly two decades and multiple Dove Award Nominations later, there have been a few personnel changes, but the message and the humor remain the same. The group continues to perform and create strictly Gospel Bluegrass music. The members maintain a fun-lovin’ and crowd-pleasin’ attitude focused on the message of the gospel of Jesus Christ.

Their first single release on Great Escape Records, "Songs Like Those (For Days Like These,)" may prove to be The Chigger Hill Boys & Terri's biggest hit yet; the song is receiving airplay across multiple genres. The group continues to receive positive feedback on how the song is a blessing, reminding listeners of fond memories of singing hymns gathered around the piano with family and friends.

Current lineup:
Mike Richards (Mandolin/Guitar)
Born and raised in Hendersonville, TN, Mike developed a love for Bluegrass, and in particular, Gospel Bluegrass at an early age. Much of Mike’s family lived in Kentucky and he was strongly influenced by the rural KY Bluegrass scene. He is also an accomplished songwriter with songs recorded by numerous bluegrass and southern gospel groups as well as contributing much of the songwriting for the group. Mike won a Dove Award for "He Still looks Over Me," co-written by Rodney Lay Jr.

Terri Argot Gore (Lead Vocals)
Born and raised near the northern tip of the Appalachians in the Poconos of Pennsylvania, Terri came by that Bluegrass sound naturally and honestly. She began singing at a very early age along with her musically gifted family, as well as at her small rural home church. She implements a traditional mountain vocal style reminiscent of the early works of Dolly Parton.

Ricky Gore (Upright Bass)
Born in Fredericktown, Missouri, Ricky moved around with his family quite often while growing up, from VA, MO, FL and back again. Ricky began his musical career as a drummer, which he stayed with for 20+ years. With his love for rhythm, he moved seamlessly to the acoustic bass when joining the band.

Jim Britton (Banjo/Guitar/Backing Vocals)
Jim has worked with several famous groups including Larry Sparks, Jim and Jesse, and many others. He played professionally until August of 1999, and is now an assistant pastor in Carthage, TN. He has worked on many Bluegrass Gospel CDs as well. Jim is married with 4 daughters.