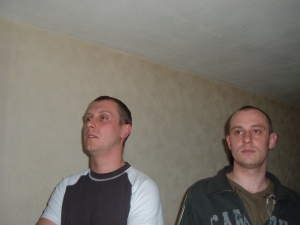 Celestial Souls from East Kilbride, Scotland are two brothers Norman and David Robb. We've been playing and writing music together for about ten years. We've always had a kinda unique understanding of what each other's gonna play and from the early days this resulted in lengthy psychedellic jams that would build and break and drift around for twenty minutes or so. The jams were interesting but a bit long so a couple of years back i tried give some focus to what we were doing. I laid down some drum beats, trimmed down the jams and we created shorter more coherent ambient tracks. We've got a handful recorded and we're working on a few more.

THE FORMATION OF CELESTIAL SOULS:

Over the years we have had various gigs and indulged in jam sessions with a list of musicians too long to remember and with so many different inputs and musical experiences to draw upon we felt it was important to distinguish our style and sound from other forms of new music available. It was with this intent the concept behind Celestial Souls was formed. Our aim was to create a new form of music which wouldn't slot straight into the established genres you'll find in most music shops. During this period we both became fans of electro/house music and when these influences started to combine with our earlier guitar based spacy, psychedellic sound some interesting collaborations were born. We now offer a collection of unique sounding laid back ambient tracks, predominantly beat driven and complimented by guitars and synthesizers. Our distinctive sound is created with live guitar and synthesizer riffs/drones laid over sequenced drum loops. Inspired by music's power to both drive and create desired moods and emotions, most tracks are hypnotic soundscapes which could form accompaniments to tv or film as well as offering easy listening in their current form.