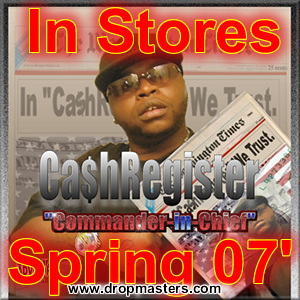 More so than any other music since the blues, hip-hop is all about stories. And its stories are both criminal minded and grand, making them enthralling and unbelievable, but also making them only as interesting and convincing as the teller. With a major-label recording contract, all the way from South Florida we bring you one of the souths most exciting Super Producer CashRegister. His primary genre of music is Hip-Hop, Rap and R&B. Currently living in Ft. Lauderdale Florida, in an interview with the The Legend by Mike McConnell (E. Addison magazine journalist) he said that this guy has everything from producing to writing and it shouldnt be that hard to achieve something that is within CashRegister's grasp. At this time CashRegister is currently working his new album scheduled to release on July 4, 2006 also working with/on other groups and individuals album as well as preparing for his tours and locally respected shows. Recently finishing the album called Commander-in-Chief they are expecting positive feed back and major music awards. He Also is involved not just in songwriting and production but also affiliated with different artists services for example BMI (performing rights company), Grammy the recording academy and the American Federation for Television & Radio Artists as well local community activities. In the past he has worked with so many talented groups and artists and proven great performances in live concerts and clubs. There plan is to become one of the best in music today and one of the greatest in the industry. By involving yourself with such a talented person you will control a part of the music industries money market and its management.