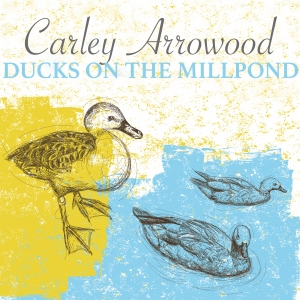 One of the most distinctive features of bluegrass is the way that an artist’s vocal prowess is frequently paired with instrumental virtuosity. Carley Arrowood fits comfortably in that mold, for while she’s a compelling singer, she’s also a powerful fiddle player who’s studied generations of bluegrass stylists and forged those influences into a style that’s all her own.

For her first Mountain Home Music Company single of 2021, Arrowood is offering her distinctive take on an enduring classic, “Ducks On The Millpond.” Though it shares its name with an old-time tune, this “Ducks” traces its lineage back to a 1975 recording by Kenny Baker, Bill Monroe’s longest-tenured fiddler and a member of the Bluegrass Hall of Fame. Even so, Arrowood’s version comes from a more recent example.

“I’ve been playing this tune since I was 15 years old,” she says. “Just a green bluegrass fiddler taking lessons with Bryan McDowell. He had my mom order all these albums by different fiddlers for me to listen to and study their different styles, and one of them was Aubrey Haynie’s Bluegrass Fiddle Album — still one of my favorite fiddle albums ever. ‘Ducks on the Millpond’ instantly became a favorite, and I remember trying to learn exactly what Aubrey did. When we recorded it, we made it our own by creating an arrangement of multiple split breaks, and I couldn’t be more excited about it! It’s so much fun, and I hope y’all enjoy our take on this great tune!”

With a stellar group that includes musical partner Daniel Thrailkill on guitar, five-time IBMA Banjo Player of the Year, Kristin Scott Benson, mandolinist Wayne Benson and bass player Paul Watson, Arrowood attacks the tune with a strong bow arm and vibrant tone in classic fiddle-and-banjo style before giving way to an intricate succession of handoffs from one player to the next. The result is a neatly kaleidoscopic unfolding that brings a uniquely elegant energy to one of the most popular tunes in the bluegrass fiddle repertoire. Coming on the heels of Arrowood’s first hit song, “Ducks On The Millpond” is a refreshing reminder that she’s not just a fine singer, but an instrumental force to be reckoned with, too.

About Carley Arrowood
Though she’s young, Carley Arrowood is already something of a musical veteran. Singing since she was old enough to talk, she’s been playing fiddle for over thirteen years and has spent the past five years as a featured band member with the award-winning duo of Darin & Brooke Aldridge.

Carley began playing in a classical vein but soon gravitated toward the bluegrass music and fiddle tunes of her western North Carolina home. With her sister, Autumn, she formed a band called Carolina Jasmine, which became the first all-female group to win the Junior Band Championship at the famed Fiddlers Grove convention. Her career progress flourished through high school, as she began to work at Dollywood, competed in — and took home trophies from — an impressive list of fiddle contests, and became one of the featured musicians in the International Bluegrass Music Association’s (IBMA) annual Kids on Bluegrass program.

A developing songwriter — her “Jesus Drive The Train,” a co-write with the award-winning Becky Buller, earned her a showcase appearance at the IBMA’s World of Bluegrass in 2015 — Carley’s been recognized for her fiddle playing as well, receiving an IBMA Momentum Instrumentalist of the Year trophy in 2017. And in 2014, just a day after graduation, Carley began filling in with Darin and Brooke, joining them full-time that fall after turning 18. Since then, she’s performed with the duo at the Grand Ole Opry, on television shows like “Larry’s Country Diner,” on European tours and at bluegrass festivals and concerts around the country.