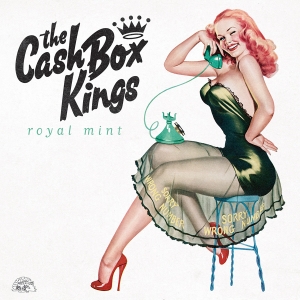 With deep feeling and top-shelf talent, houserocking blues masters The Cash Box Kings play tough, real deal classic Chicago blues with boundless energy. They also deliver raw, passionate Delta blues, jumping proto-rock 'n' roll, and steamrolling "bluesabilly," their original mix of Chicago blues and Memphis rockabilly. As anyone who has ever been to one of the band's raucous performances will testify, The Cash Box Kings know how to throw a party. They're fueled by the powerhouse harmonica work of Madison, Wisconsin-based songwriter Joe Nosek and the huge, gritty vocals of Chicago bluesman Oscar Wilson. Their original songs range from humorous stories of Internet love to harrowing tales of Chicago's violent gun epidemic. Every song they perform - be it a striking original or a scorching Chess, Sun or Vee-Jay cover -
explodes with contemporary authority and radiates old-school authenticity. According to Grammy Award-winning blues legend Charlie Musselwhite, "The Cash Box Kings play with real taste and feel. Not only is it good blues but it's a jumping good time, too! I ain’t lyin'!"

Joe Nosek founded The Cash Box Kings in Madison, Wisconsin in 2001 and, since 2007, has co-led the band with the charismatic, larger-than-life vocalist Oscar Wilson. Over 20 years apart in age and coming from vastly different backgrounds, the two form an unlikely pair, combining Wilson's indisputably authentic inner city Chicago blues vocals with Nosek's harmonica, songwriting and singing talents. The music they create is brilliantly displayed on The Cash Box Kings' Alligator Records debut, Royal Mint. According to Wilson, "The Cash Box Kings is a throwback to the golden age of blues with some kickin' fresh young blood. Joe is my best friend in the music world—the band is a marriage made in heaven for both of us." "Oscar is godfather to my oldest son," says Nosek. "We have each other's backs. We’re family."

Royal Mint features 13 hard-hitting songs, including six impressive originals. From the wry, politically-charged "Build That Wall" to the chilling "Blues For Chi-Raq" to the funny and too true "If You Got A Jealous Woman Facebook Ain't Your Friend" to the timeless versions of songs by Robert Johnson, Muddy Waters, Junior Wells, Clifton Chenier, Amos Milburn and Jimmy Reed, Royal Mint shuffles, jumps and gets down and dirty, fueled by the band’s unmatched musicianship. According Nosek, "Royal Mint is our strongest album. The band is at its absolute best."

In their first six years, The Cash Box Kings won a large and loyal audience across the Midwest. Wilson joined the band in 2007, bringing with him an instantly commanding stage presence and an authoritative vocal style that gives fire-breathing power to the music. A self-taught musician and singer with an encyclopedic knowledge of almost every blues song known to man, Wilson—standing 6'1" and weighing over 300 pounds—is a natural-born entertainer and a perfect foil for Nosek and the band. Born in 1953 on Chicago's 43rd Street (aka Muddy Waters Drive), Wilson grew up in the company of many famous blues artists. Junior Wells, Elmore James, Big Smokey Smothers and close family friend David "Honeyboy" Edwards were all regulars at weekly Friday night fish fries/jam sessions at the Wilson home. Throughout his adulthood, Wilson held regular jobs but was always welcome sitting in with Chicago blues mainstays Melvin Taylor and Johnny B. Moore. His vocal inspirations range from Muddy Waters, B.B. King and Albert King to Jimmy Reed, Jimmy Rogers and Little Walter but he mostly sings like Oscar Wilson. Award-winning harmonica giant and vocalist Rick Estrin (leader of Rick Estrin & The Nightcats) says, "That guy can really sing."

A self-described blues fanatic, Nosek, born in Wisconsin in 1974 and raised in Chicago, spent his youth soaking up as much blues music as he could hear, both live and on record. In his teens, he began sneaking into blues clubs to watch Junior Wells, James Cotton, Otis Rush, Jimmy Rogers, Sunnyland Slim and others. Nosek recalls, "Seeing those guys work made a huge impression on me and propelled me into wanting to learn how to play the blues." He took up harmonica, quickly cultivating his own aggressive, fluid style.

After moving to Madison in the early 1990s, he began sitting in with artists such as Clyde Stubblefield and Luther Allison. Finding like-minded musicians hell-bent on playing raw, rough-edged, hard-charging blues, Nosek formed The Cash Box Kings. They released their first album, Live! At The King Club, in 2003, instantly earning praise from critics and fans, and gaining a reputation as one of the hottest live bands on the circuit.

With eight previous releases to their credit and hundreds of live performances under their belts, The Cash Box Kings have won widespread acclaim throughout the blues world. Their 2013 release Black Toppin' won the 2013 Blues Blast Music Award for Traditional Blues Album of the Year. It was also nominated for a 2014 Blues Music Award in the same category. Their last release, Holding Court, was nominated for two 2016 Blues Music Awards (Best Traditional Album and Album of the Year) and the band was also nominated for the Band of the Year Award. They've been featured on NPR Music as well as in the pages of No Depression, The Chicago Tribune, The Pittsburgh Post-Gazette, Living Blues, Vintage Guitar, Blues Blast and many other publications. Living Blues said, "This accomplished band of musicians captures the vibe of traditional blues and flawlessly spins it in innovative ways."

According to Alligator president Bruce Iglauer, The Cash Box Kings are a natural addition to the label. "I love this band because they combine the classic Chicago blues style with contemporary lyrics, true blues vocals and terrific musicianship. Oscar Wilson's voice is a soulful roar like Muddy Waters' and Joe Nosek plays powerhouse harmonica in the James Cotton tradition. Billy Flynn and Joel Paterson are world-class blues guitarists. The whole band can deliver jumping party shuffles or down-in-the-alley gritty blues. Their fresh songs bring wry humor to subjects like current politics, the pitfalls of social networking and life on the tough streets of Chicago."

Nosek agrees, saying, "We're very happy about finding a new home with Bruce Iglauer and the good folks at Alligator Records. As blues musicians who grew up in Chicago, becoming a part of the Alligator roster is a great honor for us. It's the label that has released some of our all-time favorite blues records."

With blasting harmonica, soul-deep vocals, original songs and sizzling guitars, The Cash Box Kings boast an array of talent to satisfy blues lovers of every shape and size. On Royal Mint they make old blues new as they continue to create new blues classics, with, according to Elmore magazine, "just the right amount of juke joint grit." Living Blues says The Cash Box Kings are “straight from the golden era of the blues,” boasting "an impressive line-up of A-list players. Joe Nosek feels Little Walter and Slim Harpo in the essence of his soul. Singer Oscar Wilson could be right out of [Chicago's famed] Checkerboard Lounge in its glory days. The Cash Box Kings are a dancing and listening pleasure."