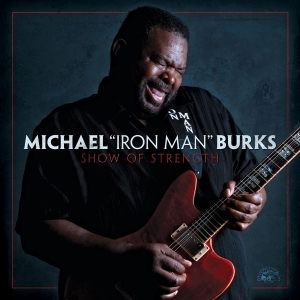 Guitarist/vocalist/songwriter Michael "Iron Man" Burks was a modern-day blues hero. His "Iron Man" moniker was born from his hours-long, intensely physical performances, his fearsome guitar attack and his tough, smoky vocals. It also came from the thousands of miles a year he personally logged behind the wheel of his touring van. His fiery music was driven by an intense, blue collar work ethic that won him a rabid worldwide fan base. Between his blistering guitar sound-which could at any moment become sweetly melodic-and his live charisma, Burks earned four Blues Music Award nominations, including, most recently, the 2012 nomination for Guitarist Of The Year. He won the 2004 Living Blues magazine Critics' Award for Best Guitarist. GuitarOne named his Alligator Records debut album, Make It Rain, one of the Top 200 greatest guitar recordings of all time. According to Living Blues, "Burks burns his own signature onto almost everything he touches...he has the ability and the imagination to fuse the best of the old and the new." When he suddenly died at age 54 on May 6, 2012, the world lost a true musical treasure.

Burks' final album, Show Of Strength (on which he wrote or co-wrote five of the album's 12 tracks), was recorded and finished just prior to his untimely death. From the explosive opening blast of "Count On You" to the closing strains of Charlie Rich's elegiac "Feel Like Going Home", Burks' signature combination of feral yet tuneful guitar work with his gritty, dynamic vocals provided a searing, emotional autobiography in blues. According to Alligator president Bruce Iglauer, "It was my decision to leave this album as we intended it, not as a memorial to a friend and bluesman gone, but as a living, breathing statement, sent straight from Michael's heart and soul. Although Michael is not here, the music he recorded is indeed his show of his immense strength and spirit. It will live on, confirming forever his status as one of the greatest bluesmen of his generation."

Born in Milwaukee on July 30, 1957, Michael Burks quite literally entered the world with blues in his blood. Joe Burks, Michael's grandfather, played acoustic Delta blues guitar in his hometown of Camden, Arkansas. Michael's father, Frederick, was a bass player. For years, Frederick Burks worked in Milwaukee steel mills and refineries during the day and spent his evenings performing in the city's dimly-lit blues clubs, often backing harmonica legend Sonny Boy Williamson II as well as other touring blues luminaries and local stars.

Michael first held a guitar when he was two years old, and Frederick immediately began teaching his son how to play. Equipped with a fully functional, child-size guitar, the young Burks began emulating the bass runs of his father. Soon he was learning scales and songs. By the age of five, he was diligently studying his father's 45s, aided by an effective lesson plan. "I'll give you a dollar if you learn this song by the time I'm home from work," Frederick would tell his young prodigy. Sure enough, Michael would learn that tune inside out and sideways by the time his father walked through the front door. When he was six, Michael played his first gig during a visit to his family's hometown in Arkansas. The fledgling guitarist took the stage with his cousin's band and thrilled an unsuspecting audience. In 1971, at age 14, he got his first road gig, touring California as guitarist with Michael Clay and the Fabulous Souls.

In the early 1970s, Frederick Burks moved his family back to their southern home. There, along with his siblings, Michael helped his father build The Bradley Ferry Country Club-a 300-seat juke joint. By this time Michael was fronting his own band and backing most of the blues and R&B greats who passed through town, including Johnnie Taylor and O.V. Wright. Business at The Bradley Ferry thrived for years, with Michael Burks leading the house band every Thursday through Saturday. Tables near the stage had to be reserved two weeks in advance. His status as a local celebrity was further heightened by his success at rebuilding and racing motorcycles.

Michael, with a new baby daughter to raise, wanted a stable home life and a steady paycheck. He took a job as a mechanical technician for Lockheed-Martin. But his desire to perform persisted, and in 1994 he formed a new band and began playing clubs and regional festivals. Despite his not having a record deal, the high-powered energy of Michael's performances began to earn him festival offers from Florida to California. Fortunately, Michael's boss was a blues lover. He recognized Michael's ability and encouraged it, giving Burks the flexibility of long weekends in order to tour. On more than a few occasions, Lockheed even entertained its clients by flying them to Michael's festival appearances.

Burks self-released his debut CD, From The Inside Out, in 1997. His impassioned, string-bending solos, combined with his fiery tone and smoldering vocals, left no doubt that Michael Burks was an emotionally-charged blues powerhouse. Critics and fans loved what they heard. Living Blues rated it as one of "the best debut discs of the year." In 2000, Burks received a Blues Music Award nomination for Best New Artist, even though he was already a hard-working professional.

With Make It Rain, his 2001 Alligator debut, Burks achieved well-deserved national and international acclaim and became one of the blues world's fastest-rising stars. He immediately hit the road in support of the CD, bringing his blistering blues to fans across the country, throughout Europe, and even to Australia. Guitar Player said, "Burks plays and sings with conviction, as he proves with each song." 2003's I Smell Smoke featured songs driven by Burks' feral guitar playing and impassioned vocals. As raw and galvanizing as ever, Burks played with the precision and dedication of a seasoned veteran. He received the Blues Music Award nomination for Contemporary Blues Album Of The Year. His next album, 2008's
Iron Man, drew even more rave reviews. Blues Revue said, "Burks' down and dirty guitar screams and wails on every cut. Hard-hitting blues, outrageous tone...blazing, explosive solos. His [music] is full of soul and passion. His vocals possess the rich soulfulness of B.B. and rival his stinging guitar work as his greatest talent."

The unstoppable, heartfelt intensity that Burks brought to the stage was the very core of his appeal. His passionate music and undeniable charisma made him an overwhelming force in the blues. On Show Of Strength, Burks is captured at the absolute height of his musical powers. With taste, melodicism, and always in full command of his mighty guitar playing and soul-baring, fervent vocals, Michael "Iron Man" Burks leaves a legacy of extraordinary music, including the new Show Of Strength-a timeless statement of universal truth from a larger-than-life musician certain to become a blues legend.

It's almost impossible to believe that this will be the last album from Michael Burks, the Iron Man of the blues. The final mixes had just been completed while he was on a European tour, and they were waiting for him at his home. He never got a chance to hear them; this gentle giant died suddenly of heart failure on May 6, 2012, at the age of 54.

Michael was so proud of this album, his fourth for Alligator. He and I both believed that it would be the one that finally propelled him into the top echelon of blues musicians, where he certainly deserved to be. He had been poised for that position for almost a decade, earning ever-increasing fame with his blistering gigs and soulful recordings. He might have gotten there a lot sooner, but in his 20s he had chosen family over career. He had put away his guitar for years while he raised his beloved daughter Brittney in their southern Arkansas hometown of Camden. It was only when she was a teenager that he returned to his music and hit the long, dues-paying highway toward what passes for stardom in the blues world. From local and regional gigs to national and international club and festival stages, Michael's reputation and fan following was built one sweaty, hours-long gig at a time.

It was in Camden where Michael first honed his music, playing from his very early teens in his family's juke joint, The Bradley Ferry Country Club. He already had a blues bloodline; both his father and grandfather were bluesmen. Michael was very proud of his musical heritage. It wasn't easy to get him to talk about himself, but he could talk all night long about the bluesmen and women he had played with and idolized, and, above all, his first teacher-his father, Frederick Burks.

Working with Michael on four albums, seeing him burn up bandstands across the country, hanging out with him backstage, attending his late-night barbeques at the campground at the King Biscuit Blues Festival in Helena, Arkansas and visiting Michael and his wife Bobbie at their home in North Little Rock, I got to know not only Michael Burks the bluesman, but also Michael Burks the man. I saw firsthand his devotion to his family (he would stop each recording session nightly to phone his wife and his grandchildren), his loyalty to his friends and band members, and his "Iron Man" work ethic (often driving his own van hundreds of miles before unloading his own gear and delivering three or four hours of non-stop music). Michael was not only a top-quality bluesman; he was a top-quality human being.

It was my decision to leave this album as we intended it, not as a memorial to a friend and bluesman gone, but as a living, breathing statement, sent straight from Michael's heart and soul. Although Michael is not here, the music he recorded is indeed his show of his immense strength and spirit. It will live on, confirming forever his status as one of the greatest bluesmen of his generation.