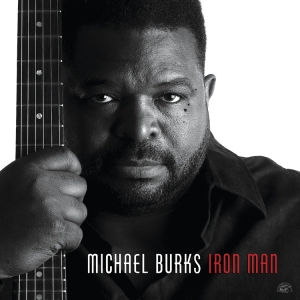 Guitarist/vocalist/songwriter Michael "Iron Man" Burks was a modern-day blues hero. His "Iron Man" moniker was born from his hours-long, intensely physical performances, his fearsome guitar attack and his tough, smoky vocals. It also came from the thousands of miles a year he personally logged behind the wheel of his touring van. His fiery music was driven by an intense, blue collar work ethic that won him a rabid worldwide fan base. Between his blistering guitar sound—which could at any moment become sweetly melodic—and his live charisma, Burks earned four Blues Music Award nominations, including, most recently, the 2012 nomination for Guitarist Of The Year. He won the 2004 Living Blues magazine Critics' Award for Best Guitarist. GuitarOne named his Alligator Records debut album, Make It Rain, one of the Top 200 greatest guitar recordings of all time. According to Living Blues, "Burks burns his own signature onto almost everything he touches...he has the ability and the imagination to fuse the best of the old and the new." When he suddenly died at age 54 on May 6, 2012, the world lost a true musical treasure.


Boasting remarkable natural talent and a blue-collar work ethic, Michael Burks was a musician with deep roots in the blues tradition. He performed every song with intensity, conviction and soul. Even though he had been playing music since he was a child, it was the release of Make It Rain, his Alligator Records debut in 2001, that brought Burks well-deserved national recognition and made him one of the blues world's fastest-rising stars. His 2003 follow-up, I Smell Smoke, continued his upward trajectory, as his fan base increased as quickly as his bookings. With inspiration from Albert King, Freddie King and Albert Collins, Burks' sound and style were all his own. Blues Revue says, "Burks delivers blazing, explosive solos and outrageous tone…part rock, part soul and filled with plenty of blues sensibility."

Born in Milwaukee in 1957, Michael quite literally entered the world with blues in his blood. Joe Burks, Michael's grandfather, played acoustic Delta blues guitar in his hometown of Camden, Arkansas. A multi-talented man, Joe was a barber, carpenter and aviation mechanic in addition to playing in area juke joints. Michael's father, Frederick, was a bass player. For years, Frederick Burks worked in Milwaukee steel mills and refineries during the day and spent his evenings performing in the city’s smoky, dimly-lit blues clubs, often backing harmonica legend Sonny Boy Williamson II, as well as other touring blues stars and local front men.

Michael first held a guitar when he was two years old, and Frederick immediately began teaching his son how to play. Equipped with a fully functional, child-size guitar, the young Burks began emulating the bass runs of his father. Soon he was learning scales and songs. By the age of five, he was diligently studying his father's 45s, aided by an effective lesson plan. "I'll give you a dollar if you learn this song by the time I'm home from work," Frederick would tell his young prodigy. Sure enough, Michael would learn that tune inside out and sideways by the time his father walked through the front door. Michael had begun to collect a tall stack of dollar bills when the elder Burks realized his teaching tactics were burning an unwanted hole in his wallet. Finally, Frederick told his son, "Here's another 45. You learn this one, and you're gonna get a lickin'." But Michael kept practicing, and by the time he was six, he played his first gig during a trip to his family's hometown in Arkansas. The fledgling guitarist took the stage with his cousin's band and thrilled an unsuspecting audience.

In the early 1970s, after a machine accident left his hand injured and his musical career severely hampered, Frederick Burks moved his family back to their southern home. There, Michael and his siblings helped their father build the Bradley Ferry Country Club – a 300-seat juke joint. By this time Michael was fronting his own band as well as backing several of the blues and R&B greats that passed through town. Johnnie Taylor and O.V. Wright were just two of the luminaries to call on Michael's services. Business at the Bradley Ferry thrived for years, with Michael Burks leading the house band every Thursday through Saturday. Tables near the stage had to be reserved two weeks in advance.

When the Bradley Ferry finally closed in the mid-1980s, Michael needed to find a day job. For over a decade he worked as a mechanical technician for Lockheed-Martin; at one point during his stint with the advanced technology corporation he even built missile components. But Michael's desire to perform remained strong, and in 1994 he formed a new band and began playing clubs and regional festivals. Despite his not having a record deal, the diesel-powered energy of Michael's performances began to earn him festival offers from Florida to California. Fortunately, Michael's boss was a blues lover. He recognized Michael's ability and encouraged it, giving Burks the flexibility of long weekends in order to tour. On more than a few occasions, Lockheed even entertained its clients by flying them to Michael's festival appearances.

Michael released his self-produced debut CD, From The Inside Out, in 1997. The album confidently announced Michael's intention to take the blues world by storm. His impassioned, string-bending solos, combined with his fiery tone and smoldering vocals, left no doubt that Michael Burks was an emotionally-charged blues powerhouse. Critics and fans loved what they heard. Blues Access proclaimed From The Inside Out to be "the most impressive indie in recent memory," and Living Blues rated it as one of "the best debut discs of the year." In 2000, Burks received a Blues Music Award nomination for Best New Artist, even though he was already a hard-working professional.

Burks joined the Alligator family in 2001 and released the critically acclaimed Make It Rain. The Chicago Sun-Times called the album "chilling and heartfelt." Billboard agreed, declaring, "Burks is a powerhouse blues guitar slinger…he blasts through licks like Clapton used to play–think lightning–just because he can. He is a great guitarist." Vintage Guitar said, "Gospel-ringed, sweet and nasty. Burks will warm your heart at the same time he puts a chill down your back." He immediately hit the road in support of the CD, bringing his blistering blues to fans across the country and throughout Europe and Australia as well, with gigs at clubs, concert halls and major festivals everywhere.

His next album, I Smell Smoke, featured songs fueled by Burks' feral guitar playing and tough, soulful vocals. As raw and passionate as ever, Burks played with the precision and dedication of a seasoned veteran. Living Blues said, "Burks' fretwork is skin-tight yet emotionally expressive. His voice is dusky and sensual yet shot through with virility. Burks burns his signature onto almost everything he touches with aching passion and the probing intensity of his guitar. He has the ability and the imagination to fuse the best of the old and the new." Burks received three Blues Music Award nominations for his work on the CD, including Contemporary Blues Album Of The Year and Blues Song Of The Year for the title track.

The unstoppable, heartfelt intensity that Burks brought to the stage was the very core of his appeal. His passionate music and undeniable charisma made him an overwhelming force in the blues. With taste, melodicism, and always in full command of his mighty guitar playing and soul-baring, fervent vocals, Michael "Iron Man" Burks leaves a legacy of extraordinary music and timeless statements of universal truths.

This is Michael Burks’ third album for Alligator, and it’s been a thrill to watch him grow as an artist—from the juke joint-raised bluesman from tiny Camden, Arkansas playing clubs across the South into a giant of the blues, headlining festivals around the world. In those few years, Michael has honed his own huge guitar sound, bringing a level of rock intensity to the tasteful soulfulness of his playing, and finding his own singing voice, full of emotion and energy. For my money, if anyone in the blues can fill the void left by Freddie King and Luther Allison, it’s Michael Burks.

To capture all the fire of Michael’s live performances, we decided to cut this album with his seasoned road band rather than with the Memphis studio aces who supported him on his last two records. Wayne, Popcorn and Don have backed Michael on literally hundreds of gigs, and they know his every move. So we were able to cut these tunes almost completely live in the studio, with Michael lighting a fire under the band just like he does onstage.

This album captures Michael “Iron Man” Burks at full force, doing what he does so brilliantly a hundred nights a year—delivering raw, up-to-the minute, electrified and electrifying blues with a master’s touch.