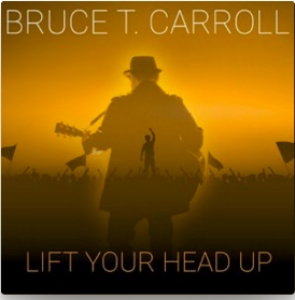 After releasing two critically acclaimed albums in the last three years, "Ruckus and Romance" (2017, "devilishly brilliant", "intensely beautiful"/No Depression), and "Finding You" (2018, a "fine, intense commentary on America's past" /No Depression), Bruce T Carroll has just released his new single, the timely and powerful anthem "Lift Your Head Up" ( https://m.youtube.com/watch?feature=youtu.be&v=Ub46Lu1tl28)
The song was recorded with a band of supremely accomplished musicians, including Marc Shulman, Tommy Mandel, Sara Milonovich, Nicole Alifante, Joe Bonadio, and Lincoln Schlieffer,

Bruce's music, lyric driven and imagistic, has been described as an amalgam of Tim Hardin, Tom Waits, Mark Knopfler and Bruce Cockburn. His signature songs, including "When Two Worlds Collide" (from Ruckus and Romance) and "Fox In The Henhouse" (from Finding You), continue to get significant airplay worldwide. These songs, along with "Lift Your Head Up" and others from his catalogue, are rooted in his conviction that music and social conscience come from the same wellspring of humanity, and derive meaning and power from their ability to unite and inspire...

Bruce has promoted his work on stage in the past three years alongside artists such as Slaid Cleaves, Ellis Paul, Jimmy Lafave (RIP), Dan Bern, Vance Gilbert, and Rita Coolidge, and has headlined shows with his band at various clubs in NYC and the tri-state area, including the Bitter End, Rockwood, Colony, Falcon, Turning Point and Towne Crier. Last summer marked the Bruce’s ascent to various Festival stages, including the Pleasantville Music Festival, The River Spirit Music and Arts Festival, and the Black Bear Americana Festival!