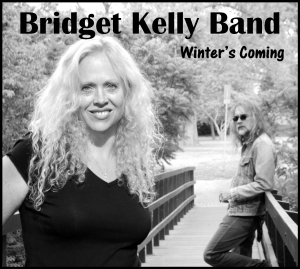 Singer Bridget Kelly, teamed up with husband/guitarist/producer Tim Fik to form the Bridget Kelly Band in 2012 -- a Blues-Rock quartet that continues to explore their musical roots and grow their international fan base as they celebrate their 10th Anniversary. The band's music has been heard on countless radio shows around the globe. BKB gained visibility after their song "Texas Toast" enjoyed regular rotation on Tony Colter's Sirius-XM radio show (B.B. King's Bluesville), with the release of their 2014 "Forever in Blues" CD. BKB's influences included Electric Blues, Blues-Rock, and American Roots music.

The Bridget Kelly Band is all about forging connections with their audiences and fans through their incendiary live performances, with original compositions that mix elements of Texas and Memphis Blues, with Blues-Rock and Southern Rock influences. In 2017, the release of the highly acclaimed and revered “Bone Rattler” – a double CD on Alpha Sun Records -- was #1 on the RMR "Electric Blues” Album chart for 24 weeks, and was the #2 Electric Blues Album of the Year (2014). Their follow-up release entitled “Blues Warrior” (2018) would reach #3 on the RMR Blues-Rock Album chart and hit #1 in their home state of Florida. In 2020, they released yet another top-10 Blues-Rock charting album entitled "Dark Spaces", with excellent reviews and steady airplay from DJs in the U.K., Australia, and numerous other countries.

Drummer Curtis Lyons Jr. and bassist Greg Mullins comprise the Bridget Kelly Band's vibrant and highly-proclaimed live rhythm section. Their presence and contributions have helped take the group's music and live concert performances to another level. The band continues to perform at clubs, festivals, concert halls, and music venues across the nation... from Florida to Minnesota, and Maine to Colorado. In addition to having performed at well over six-dozen well-noted Blues and Music Festivals across the country, BKB was recently lauded as the "Hardest Working Blues Band" in Florida by Phoenix Radio. In addition to the band's musical success, (Dr.) Tim Fik was honored as a 2018 recipient of a "Keeping the Blues Alive" Award from the Blues Foundation (www.blues.org) for his tireless efforts at promoting blues music awareness through education.

With a captivating smile, sultry vocals, and commanding stage presence, Bridget Kelly continues to gain fans wherever she performs. The Bridget Kelly Band certainly knows how to "rock the blues" and fire-up a crowd; and their live performances have become legendary. As an advocate for Blues Women everywhere, sponsoring Women in Blues showcases around the country, Bridget continues her mission to highlight the contributions of female artists and level the playing field.

New all-original material is currently being released on their 7th album/CD entitled "Winter's Coming" on Alpha Sun Records (November 1, 2022). This eclectic album and musical experiment is dedicated to Bridget's dad-- Peter John Kelly, Sr., who passed in 2021. The work is a mix of songs influenced by Blues, Blues-Rock, Pop, and American Roots music. The very first track is a 28-second voice message, the very last message Bridget received from her dad before his passing. The proclamation that "Winter's Coming", provided the inspiration for the songs on the album.

After a decade of musical expression and countless standing ovations, the Bridget Kelly Band continues to push the artistic envelope, while honoring the musical traditions of the past. The band's latest release is a testimony to the enduring character of the Blues and the genre's ability to continue extending its influence as a dynamic musical form.