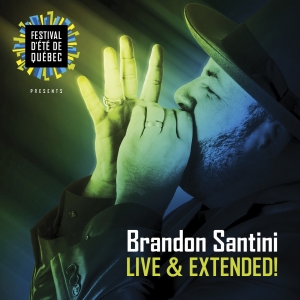 The scene is Quebec’s upscale concert venue, le Petit Impérial, on a weekend night in July, in the middle of the exuberant Festival D’été de Quebec. The packed house responds quickly as Brandon Santini and his tight touring band hit the stage with all the raw blues power and impact of the 1970’s-era Paul Butterfield or James Cotton Blues Band. The band feels the energy and responds with over an hour of the hard-hitting harmonica-driven blues that’s been causing fans and critics alike to tap the Memphis-based Santini as one of the most quickly-rising blues stars of his generation.
For Brandon Santini, “It’s all about the vibe of your surroundings. With a great live audience fueling you it’s a lot more inspirational and allows you to give more to the audience.”
Singer/songwriter/harmonica player Santini moved from North Carolina to Memphis in 2003 and promptly established himself as a leading musician in the Beale street clubs. He has steadily built his fan base with two previous albums, and tours regularly. His A-team road band of Timo Arthur on guitar and backing vocals, Nick Hern on bass and backing vocals, and Chad Wirl on drums complete this dynamic, exciting set.