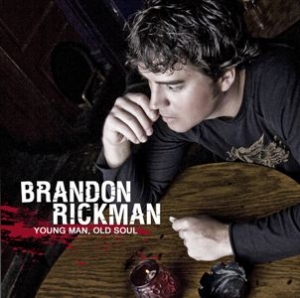 BRANDON RICKMAN has created a definite buzz over the past several years in the Bluegrass and Country community with his distinctive vocals and songwriting talents. “YOUNG MAN, OLD SOUL” is his first solo album and comes right on the heels of the 1 Bluegrass Unlimited album “No Turning Back” from the Lonesome River Band of which Brandon is their lead singer and guitarist.

The first single, “Always Have, Always Will” is a fiery up tempo song written by Chris Stapleton and Brandon Rickman which contains an incredible intro and reprise by Randy Kohrs and features Brandon’s powerful lead vocals and beautifully blended harmony vocals by Terry Eldridge.

Produced by Jimmy Metts & Brandon Rickman, “YOUNG MAN, OLD SOUL” is sure to generate tons of radio and internet airplay this summer on many Bluegrass, Country & Americana stations all over the world. Brandon is currently on tour with the Lonesome River Band and will be heavily promoting both the current LRB album “No Turning Back” and his new solo album.

Jimmy Metts- engineer- all basic tracks
Cord Phillips –engineer - drum and bass tracks on “I Take The Back Roads” & “Wide Spot in the Road” recorded at Gasoline, Inc.