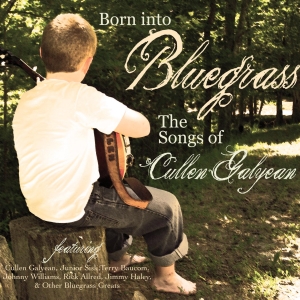 Galyean was literally 'Born Into Bluegrass'. Based on the region where he was born and the people he grew up around, music has always been a huge part of the life of Cullen Galyean. It was the way he lived and became the way he expressed himself musically. He created music from the heart in a driving style that preceded many of the popular Bluegrass artists that emerged on the scene in the 1960's and 70's. Whether it was a social gathering, church or family and friends getting together to play instruments and sing, Galyean truly lived the lifestyle to fully understand the music. What he created has been recreated here by some of Cullen Galyean's biggest fans---including his son Mickey. All these musicians were heavily influenced by the music and style of Cullen Galyean. Even more special, Galyean himself contributes his own talents to this recording.

How lucky Cullen Galyean was to have been 'Born Into Bluegrass'. How lucky we all are to get to experience this collection of songs. Enjoy!”

Born Into Bluegrass is a fantastic collection of fifteen Cullen Galyean original songs performed by some of traditional bluegrass music’s greatest stars. This project features many bluegrass greats who have come together to pay tribute to a humble legend who has quietly made monumental contributions to bluegrass music over the past 61 years. This CD started life simply as a son’s tribute to his father, but word quickly spread and artists began lining up to participate. All have been directly influenced by Cullen or his music in some way and feel very strongly about the importance of this project.

Cullen Galyean born in Lowgap, North Carolina in 1939 is from a family whose bluegrass roots stretch back many generations. In a video interview for this project, Gail Cooler asked, how did you get started in bluegrass and Cullen’s response was, “Honey, I was born into a bluegrass family.” The title for the CD, Born into Bluegrass, was naturally chosen that day. Those three words speak volumes about the family’s bluegrass heritage, traditions, musical abilities and future. Both sides of his family, the Galyeans and the Lowes were ‘musicianers’, as musicians are called from this part of the country.

Bailey Galyean, Cullen’s Grandson, at age 9, has asked his papaw to teach him to play the banjo and was the inspiration for the CD’s cover photo. This was the same age as Cullen when he received his first banjo 61 years ago. Cullen was “Born Into Bluegrass” as was his son Mickey. The wheel turns again and Mickey’s son, Bailey is also “Born Into Bluegrass”.

In addition to the performances by today’s prominent bluegrass artists, Cullen’s unique banjo style can be heard on “Bluegrass Time” and the original recording of “Midnight Rambler” from the very first bluegrass festival in the US in 1965 at Fincastle Virginia where Cullen took first place in the banjo category beating out a cousin, Larry Richardson. Although not able to play his beloved banjo anymore, Cullen’s is featured on baritone vocals for many songs on this recording.