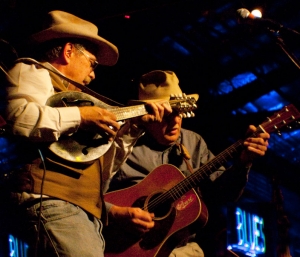 From the mountains of Far West Texas comes authentic Texas music hot as the desert sun, cool as the mountain rain. Jimmy Ray Harrell and Todd Jagger are The Border Blasters! Veterans of the Austin music scene, Kerrville New Folk Winner Jimmy Ray and Austin Music Award Winner Todd have been making music together since their first gig at Gruene Hall in 1975.

Taking their name from their home in the Texas borderlands and the “X” border radio stations that shaped their musical styles, the Border Blasters' sound is “Cowboy Swing & Hillbilly Blues” in a lively performance rooted in tight harmonies, raw musicianship and a natural engaging camaraderie. Their music connects with people of all ages.

The Austin-American Statesman says: "You can't get enough!"

In addition to their musical careers together both Harrell and Jagger have lent their talents to other bands as well. In the early 90's Todd was the mandolinist with the Austin Lounge Lizards and appeared with them at the Kerrville Folk Festival, Kuumbwa Jazz Club, the Strawberry Music Festival, on APR's Mountain Stage and many other venues. During this time the Lizards won "Best None of the Above Bands" for two consecutive years at the Austin Music Awards. Todd also was given Honorable Mention as Best Mandolinist in the Austin Chronicle and Music City Readers' Polls. Jimmy Ray, as part of the popular duo "Lou-Ray", won the New Artist Award at Kerrville New Folk Festival, and was a featured performer on the Main Stage at the Kerrville Folk Festival and on the 1975 Festival LP.

Professionalism is a trademark of Border Blasters which club owners and festival coordinators appreciate. On time, in tune, ready to make the crowd feel good!

The Border Blasters divide their time between Austin and the Davis Mountains of Far West Texas.

You can also tune in to the KRTS "Border Blast" every Thursday at 11am on KRTS-FM, 93.5, Marfa Public Radio where the boys dish up a heapin' helpin' of good Texas and Americana roots music, and sometimes they'll get out their axes and play a few themselves.

"As musicians, Jagger and Harrell are both consummate professionals - nimble and at ease in performance. Roots entertainers in the true sense of the word, they not only draw from the catalogue of the early blues and country performers, but, like those performers, can engage and entertain a crowd with nothing but themselves, their voices and their acoustic instruments." --Andrew Stuart, Feature Writer, The Desert Candle

"Love your new CD! Very laid back, spontaneous feel, stripped to the finest essentials. Sorta what I'd imagine playing in a jukebox in a roadhouse in some border town (in a perfect world, at least). I'm diggin that blues mandolin. I added to the rotation last night..." -- Cat, DJ, RadioFreeAmericana.com

"I got the new CD in the mail yesterday. Really enjoy it…then what else would I expect?" --David John, KRTU, Chicken Skin Music