Bluegrass at the Crossroads 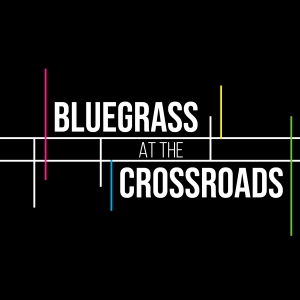 Collaborative musical encounters between distinct artists have been woven into the fabric of bluegrass at least as far back as the in-studio meeting of Flatt & Scruggs with Doc Watson. So it was almost inevitable that, at some point, the idea would surface of bringing together musicians from the groups that make up the rosters of sister labels Mountain Home Music Company and Organic Records. First laid on the table in the early days of the Covid-19 pandemic, when touring came to a halt and almost every musician’s calendar was suddenly wide open, the concept was quickly refined into what would become Bluegrass at the Crossroads: multiple groupings that would bring together players from different corners of the big bluegrass tent, from hard core traditional to edgy jamgrass; song choices focused on new, original songs; and a field of musicians broad enough to encompass not only label artists, but selected friends from the fertile musical territory around the labels’ Western North Carolina home.

Now, Mountain Home and Organic are releasing an album of these songs to streaming services and digital sales platforms. Bluegrass at the Crossroads is now available for pre-save, add and order ahead of its September 23 release.

The collection brings together nearly a score of the best in and around today’s bluegrass — musicians from the Lonesome River Band to the Infamous Stringdusters, the Traveling McCourys to the Grascals and Sideline to Zoe & Cloyd; and from the award-winning Sammy Shelor and Kristin Scott Benson to instrumental stylists like Gina Furtado, Wayne Benson, Jeremy Garrett and Andy Leftwich, to distinctive singers such as Sav Sankaran, Darren Nicholson, Carley Arrowood and Travis Book. In many cases, these sessions were the first time these colleagues had even met, much less played together — and yet, whether they’re taking on the only canonical entry (Earl Scruggs’ “Ground Speed,” which earned one of the groups an IBMA Instrumental Recording of the Year trophy) or tackling songs never heard before, they fit together musically in a way that underlines their sensitivity to and appreciation of one another’s talents.

“Choosing the musicians for each of these groups was probably the most challenging aspect of producing Bluegrass at the Crossroads,” notes producer Jon Weisberger, who also co-wrote much of the project’s material with collaborators ranging from Garrett and Book to Craig Market and the award-winning Thomm Jutz. “But it was also the most exciting, and maybe even the most rewarding. The respect these artists had for one another was evident from the moment they got into the studio, and it was gratifying to get to introduce Travis Book to Sammy Shelor, to learn that this was the first time Sammy and Wayne Benson had been in the studio together, to see Darren Nicholson and Skip Cherryholmes huddling over an arrangement, to hear Gina Furtado and Chris Davis compare notes on their kids — every session was filled with moments like those, and I believe they left their mark on the music that was made. We are so thrilled to have all this music available in one set for listeners to enjoy!”

Pre-save, add or order Bluegrass At The Crossroads on digital platforms HERE.

About Bluegrass at the Crossroads
A musical cauldron of distinctively American contributions largely rooted in the rural south, bluegrass has taken on a new identity in recent years, as new times and new musicians have naturally incorporated the sounds around them in every part of the country — and even the world. At the same time, an indispensable musical core has persevered, finding ever-changing ways to create performances that cause everyone familiar with the genre to say, “now, that’s bluegrass.”

Over the years, Mountain Home Music Company and its sibling imprint, Organic Records, have become home to a family of artists who are collectively creating music that forms part of that core, but also exemplifies the adventurous, wide-ranging side of the genre. Bluegrass at the Crossroads is a series of unique encounters between members of that family from every corner — geographical, generational, stylistic and more — of the music and the communities it has inspired, inviting them to collaborate not only through fresh takes on bluegrass classics, but especially with new songs that reflect and engage with the contemporary world.