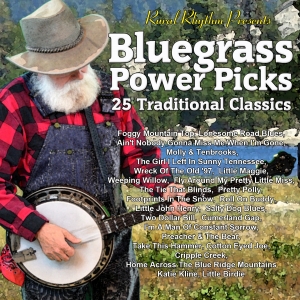 
POWER PICKS is a BEST OF series and contains Rural Rhythm’s most powerful classic song performances by many Bluegrass legends and pioneers from the heyday of Bluegrass music! BLUEGRASS POWER PICKS: 25 Traditional Classics includes 25 classic original master performances culled from Rural Rhythm’s treasure trove of over 4,000 original masters dating back to 1955. If you like traditional Bluegrass music and want a collection of classic songs performed by the Legends & Pioneers of Bluegrass, then you will enjoy BLUEGRASS POWER PICKS !

Sixty years ago, bluegrass music was born. All the elements that made up bluegrass had been around for decades, if not centuries, but it wasn’t until the mid-1940s that they coalesced into the music first heard in the southeastern United States…and now heard around the world.

Named for the bluegrass state of Kentucky, bluegrass music was rooted in Appalachian songs, themselves descended from the music that had crossed the Atlantic in the seventeenth, eighteenth, and nineteenth centuries. But, in the hands of the early bluegrass stars, traditional music was infused with the drive and improvisation of western swing and jazz. The banjo, based on an instrument that slaves had brought from west Africa, became an integral part of the bluegrass sound. It joined the fiddle, usually played in a style that harked back to the British Isles; the mandolin, an instrument that probably came to bluegrass from Italian coal miners in Appalachia; and the guitar, another European instrument that probably came to this country with Spanish immigrants.

Bluegrass quickly embraced Tin Pan Alley pop songs, hymns, blues, and new songs, but all were reconfigured to sound like Appalachian music. Bluegrass remained defiantly acoustic, but above all it remained prideful of its roots. All the music that bluegrass brought in from outside was filtered through an Appalachian consciousness. And, as most musicians who’ve tried to play it will tell you, it is usually pitched up. The high keys and high–pitched vocal harmonies led to it being dubbed the High Lonesome Sound.

During the early years of bluegrass, it coexisted happily with country music. Early bluegrass stars, like Don Reno, Red Smiley and Hylo Brown, toured alongside the big country acts of the late 1940s and early 1950s. But then, in response to rock ‘n’ roll, country music became a country-pop hybrid called the Nashville Sound. Bluegrass musicians were having none of this, and bluegrass distanced itself by holding fast to the old ways. Some lean years followed. Bluegrass stars who’d been on major labels lost their deals, and smaller labels, like Rural Rhythm (launched in 1955), grew to accommodate them. In the late 1950s, there was a folk song revival, and in 1959 folklorist Alan Lomax wrote an article about bluegrass for Esquire magazine. In it, he famously characterized bluegrass as “folk music in overdrive.” Bluegrass musicians began playing college campuses, and a new generation of college-educated bluegrass pickers came to the fore. Bluegrass was on its way back.
In the years since the 1950s folk song revival, bluegrass has seen its fortunes rise and fall, and rise again. Some say that the overwhelming success of the O Brother Where Are You? soundtrack album led to the most recent resurgence, but that’s simply not so. Bluegrass had been growing in popularity for several years as America went in search of its roots. Generations unborn at the time bluegrass originated in the 1940s have discovered that no music is more satisfying to hear or to play. It is, in many respects, all American music rolled into one.
Colin Escott