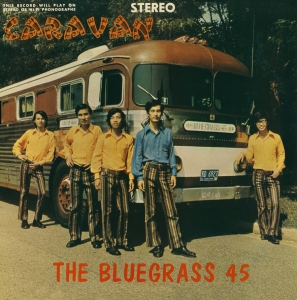 Bluegrass has always been popular overseas; nowhere has there been a more intense interest in the music than in Japan. To an astonishing degree, Japanese listeners had embraced the music, and several fine Japanese Bluegrass bands began flourishing during the 1960s. Among the best of these was Bluegrass 45, named for the year in which the music first became a full band idiom. They were superior musicians, and they sang in English surprisingly well. Yet they will probably be best remembered for their delightful stage show. They were among the first overseas Bluegrass groups to come to America, perform at many Bluegrass festivals and record for a leading Bluegrass label. Caravan is the second of three albums released on the Rebel label.
Here is a link to the Bluegrass Unlimited Special Series about the 1971 Bluegrass 45 tour: Bluegrass Unlimited Special Series
2
What's This
Advertisement