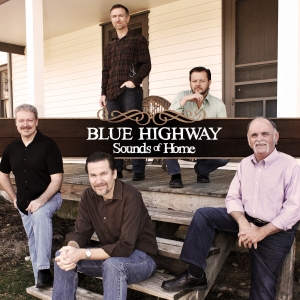 A bluegrass band that has the same five members it started with more than fifteen years ago has achieved something remarkable, but so has a bluegrass band that’s created its third set of original material. Put those two accomplishments together, then, and you’ve got something truly special. And sure enough, the easiest thing to say about Blue Highway is that they’re profoundly unique—one of the most immediately recognizable groups ever to walk into a recording studio and come out with a finished album.

Sounds Of Home arrives one long decade after Blue Highway’s first all-original collection, Still Climbing Mountains. Yet while it underlines just how right—and still how rare—that step forward was, it’s not just more of the same, not even in the most bird’s-eye view (and not only because it includes one stunningly creative arrangement of a song from the folk tradition). Indeed, to hear how far Sounds Of Home is from the earlier album (or even from their more recent Through The Window Of A Train) is to be reminded that a step, no matter how big it is, isn’t a journey. If the Blue Highway of 2011 could not have made this album without having made those others, it’s equally true that the Blue Highway that made those albums could not have made Sounds Of Home. Creativity, this album says, isn’t a steady state; it’s a process, one that ebbs and flows with the years, touching on familiar sounds and themes but finding new ones, too.

Blue Highway have always been notable for the way they reach beyond the usual bluegrass subjects, but this album is especially rich in the variety of directions that it reaches, and in the maturity of its treatments. Who besides Shawn Lane would write a song like “Storm,” or bring to life the haunting meditation of the title track? Who but Wayne Taylor could be counted on to come up with the quintessential details that punch home the lament of “Only Seventeen?” Can’t you tell from the very first lines of “Heather And Billy” that Tim Stafford and frequent writing partner Steve Gulley are bringing just the right kind of sensitivity and thoughtfulness to a story at once heartbreaking and inspirational? Listening to this set, such questions are no sooner asked than they’re answered.

Similarly, while there are no startling new directions in the playing and singing on Sounds Of Home, there’s an unmistakably new depth and confidence that can only come with years of shared music making. Look at the masterful way each song is framed, the careful choice of instrumentation and arrangement, the thoughtful approach to vocals—still more hallmarks of a unique approach. It would be easy, for instance, for each man to sing his own songs, but the easy way isn’t the Blue Highway way. Rather, each song is served up by the best singers for the job, regardless of whose pen they came from. Similarly, it would be understandable if the playing of an award-winner like Rob Ickes or under-appreciated master Jason Burleson got in the way of the nuances of a song—but what makes their playing truly great is that it’s always in service of the material and meaning, underlining rather than overshadowing. And in an age when it sometimes seems like every song is guaranteed to be delivered by a trio, to hear the deft alternation between trios, solos and duets—and the swift but measured intelligence informing instrumental solos and accompaniment alike—that characterize each of these selections provides a kind of enjoyment and engagement that can only be delivered by a group that has a profound grasp of how to stand apart from the crowd.

Even in the world of bluegrass, where trends and fads don’t have quite the same sway they do in more popular genres, there’s been a growing tendency to focus on the Next Big Thing, or on artists who bring some easily digestible new story or some easy-to-grasp new musical mannerism to the table, or on a single-minded emphasis on one sliver of the music’s rich tradition. And maybe that’s human nature—or, at least, the nature of our society in the early 21st century. But it’s one that ought to be resisted, because it makes it too easy for us to miss what’s most remarkable about Sounds Of Home. Focus on the simple fact of the band’s longevity and you’ll miss what that year-in, year-out experience of playing together has actually done for the music; concentrate on the simple fact of their reliance on original songs and you’ll miss the growing depth and complexity of the songwriting and the way it weaves together the old and the new; highlight the virtuosity of its members and you’ll miss the way that they work together, never afraid to tackle hard passages, but always in service of the material.

Ultimately, then, what makes Blue Highway so great, and this album so special, is that they are a band—not only in the way the word is used with respect to a musical ensemble, but in a larger sense, in the way it’s used in phrases like “band of brothers.” That they wouldn’t have become one without the music is an inescapable fact—but equally inescapable is the fact that it’s taken more than just music and talent to make Blue Highway into what they are today, respected, admired and loved by an entire community of artists and fans alike. And really, why would anyone want to escape those facts? Here they are, embedded in some profound, powerful and purely enjoyable music—the Sounds Of Home indeed.


Jason Burleson would like to thank: Shelly and Jacob for being the best family anyone could ever ask for... I love you both! Tony Rice, Rachel Johnson, Jennifer Murphy, Sam and Lynn Bush, Adam and Tina Steffey, Terry and Cindy Baucom, Scott Vestal, Stephen Mougin, Mike Ramsey, Keith Garrett, Henri DesChamps, Bireli Lagrene, Alice Chadwell, Barry Bales, Lynn and Ethan Church and all the Staff at Avery Hardware Store, Holly Phillips, Melissa Moody, Tim and Danny Carter, Adina Hertzberg, Kenny Johnson, Big Al Johnson, Barry and Jill Crabtree, Mike Kelly, Noam Pikelney, Chris Eldridge, Chris Pandolfi, David Grisman, Sam Grisman, The Punch Brothers, Flatt and Scruggs, Larry Hicks, Ray Dearstone, Bill Bowman, Terri Sokolow, The Burleson Family, Johnny Wayne, Jackie and Gabe Hughes, Mike and Kathy Greene, Bryan Dunaway, All my dogs, (past and present)... All my music students... All my brothers in Blue Highway... Thanks for asking me to be a part of the band, not once, but twice... and to God for the gift of music.
Jason endorses Huber and Gibson banjos, Gibson and Dearstone mandolins and Hicks and Composite Acoustics guitars.

Sounds of home, the ones I took for granted
The sounds of home the ones callin’ me
Things I used to listen to while I was thinking
Of a better place to be

Bluebird Days, the way I remember them
Fly fly away at summer's end
Remember my friend
Till they come around again

Frozen in my memory, the day that I met you
I saw the end of winter in a flash of powder blue
Did I hear you say that he was carrying the sky upon his back?

Heather and Billy only had one son of their own
But you hardly ever saw him playing all alone
Some were abandoned, some abused, some neglected, others used
But every Monday’s child felt at home, never alone

Sad-eyed Samantha, she’s only six years old
But she tells you things a kid should never know
How she cried herself to sleep, and prayed the Lord her soul to keep
It’s a wonder she’s standing here today, God made a way

Never thinking of themselves, just how to care for someone else
A quiet home just never was their style
Can’t say they had a vision, or something more profound
Truth is they just couldn’t turn ‘em down

Heather and Billy, they’re just like me and you
But look a little closer and you’ll learn a thing or two
How to love, how to grieve, How to make yourself believe
When Billy says we’re gonna make it through, we always do

Well you don’t look like you got good news
Are you here to bring me down?
Well if hurtin’s what you came to do
Then you might as well move on to another town

Down in this place of endless night
By the pale blue glow of a carbide light
Where your next breath could be your last
Taken by a roof fall, or methane gas

He was just a young boy, only seventeen
With a heart filled with life and a head filled with dreams
Biding his time down in the ground
Until one night he heard that awful sound

The timbers cracked as the top came in
He the cries and prayers of some mighty men
Saying “God have mercy on our poor souls,
Must we all perish for this seam of coal?”

It’s been fifty years since those lives were lost
But in a miner’s world there’s still an awful cost
No one knows for sure, but many men have seen
The pale figure of a miner, only seventeen


If You’ve Got Something to Say
(Tim Stafford, Jon Weisberger/Daniel House Music, BMI, Use Your Words Music, BMI)

Yesterday you told me that you lost your wedding ring
Today I found it tucked inside your purse
You say that you still love me, Baby that don't mean a thing
Empty words only make it worse

Don't make me wait forever Babe, you know I'm turning gray
If You Got Something to Say

I believe what is to be will be
No one can stop my loving you, or you loving me

A river’s made to flow, the moon was made to glow
And heaven knows God made the rose to bloom
A bird was made to fly, stars to light the night
And my heart, my heart was made to love you