Blackie And The Rodeo Kings 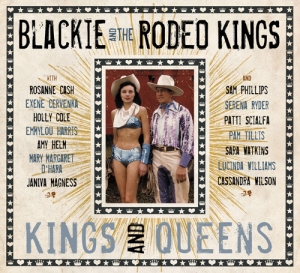 Over the past decade, Blackie and the Rodeo Kings has organically evolved into one of the finest roots-oriented bands in North America, having released six CDs and evolved a feeling of brotherhood manifested in a sense of groove, timbral blend and melodic and rhythmic play that is distinctive, mystical, energizing and constantly evocative. The sum is indeed greater than the parts - and the parts are as good as they get. Blackie and the Rodeo Kings remains one of Canada's greatest musical treasures. Blackie and the Rodeo Kings are proud to announce their upcoming release, an impressive collaboration by the name of Kings & Queens. This release pairs the band with some of their favourite female singers and friends - and some of the biggest names in roots, blues and jazz - Rosanne Cash, Emmylou Harris, Pam Tillis, Serena Ryder, Lucinda Williams, Cassandra Wilson, Amy Helm, Janiva Magness, Mary Margaret O'Hara, Sam Phillips, Sara Watkins, Exene Cervenka, Patti Scialfa and Holly Cole. Grammy- and Juno-winning producer Colin Linden (Bruce Cockburn, Tom Wilson, Stephen Fearing, Colin James) took the helm for the new album, and the new recordings have taken the Kings from Nashville to Toronto to New York City to New Orleans, Los Angeles, Woodstock and back again. As the band explains, "No destination is too far for love...." The idea for Kings and Queens was hatched in a rental van at the end of a Rodeo Kings tour. Late one night, on a long drive between Somewhere and Somewhere-else, the band began talking about the various female artists they have had the privilege of working with over the years. What began with a page torn out of a notebook and a lot of interjections like "Hey, what about..." and "Wouldn't it be great to work with ..." has transformed into a whole album featuring these legendary and iconic female voices; one on each of fourteen songs.

Blackie & the Rodeo Kings originally formed in 1996 when Colin Linden, Stephen Fearing and LEe HARVeY OsMOND came together to record what was suppose to be a one- off tribute album to the great Canadian songwriter Willie P. Bennett.
"The sum is indeed greater than the parts

At the time, all three members were deeply committed to burgeoning solo careers that they had no intentions of putting on hold, and had no plans to turn Blackie into an ongoing concern.
Now into their second decade and with one JUNO award and several JUNO nominations under their belts, Blackie and the Rodeo Kings has organically evolved into one of the finest roots-oriented bands in North America. They have released seven CDs and gradually developed a feeling of brotherhood manifested in a sense of groove, timberal blend and melodic and rhythmic play that is distinctive, mystical, energizing and constantly evocative. Blackie and the Rodeo Kings remains one of Canada’s greatest musical treasures.
39
What's This
Advertisement