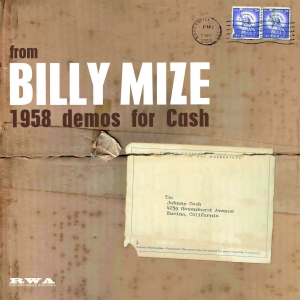 Billy Mize - 1958 Demos for Johnny Cash
While not a household name, Bakersfield, California's Billy Mize was nominated for 23 Academy of Country Music Awards between 1965 and 1973. He won several, including Most Promising Male Vocalist in 1966 and Television Personality of the Year in 1965, 1966, and 1967. In 1969 he was nominated for Television Personality once again, but lost out to another country singer who hosted his own show. The winner that time was Johnny Cash. But that wasn't the first time these two country music luminaries' lives and careers intersected. In March of 1959, Johnny Cash recorded Clementine at the same session where he cut Five Feet High And Rising. Both songs would appear on Johnny's Songs Of Our Soil album that September. The latter, of course, was written by Cash, himself, while Clementine came from the pen of Billy Mize. Mize was a pioneer on the Bakersfield music scene that spawned Buck Owens and Merle Haggard. His first major national appearance as an artist came when DECCA released his Who Will Buy The Wine in 1955. Though not a hit for Billy, it become a Top 10 single for Charlie Walker, and was recorded by Ernest Tubb, Jim Croce, Jerry Lee Lewis, Merle Haggard, and others. Thanks to his smooth vocal delivery and matinee idol charm, Mize became a mainstay on country music-themed television shows, first in Bakersfield and then in Los Angeles. When Johnny Cash moved to Southern California in 1958, he became a frequent guest on the televised Town Hall Party in Compton. Mize was already a regular cast member by that point, so when Cash was looking for songs for a new album, Billy got to work. Here, for the first time, are the demos of all six songs that Billy Mize wrote for Johnny Cash. They were recently re-discovered in a garage among several nearly-forgotten recordings, and provide a fascinating snapshot of a regional West Coast country star showing off his skills for writing songs that were strategically targeted to a specific artist. In addition to Clementine, Johnny Cash fans now have the chance to peek behind the curtain and experience a rare collection of demos as Cash heard them decades ago. It's like discovering a secret stash of Johnny Cash recordings that could have been ? and perhaps almost were!

Billy Mize (Born William Robert Mize on April 29, 1929 in Arkansas City, Kansas) is a steel guitarist, band leader, vocalist, songwriter, and TV show host. Mize was raised in the San Joaquin Valley of California, an area steeped in country music thanks to relocated Okies. He originally learned to play guitar as a child, but fell in love with the steel guitar he received for his 18th birthday.
Mize moved to Bakersfield, California and formed his own band playing local gigs and also working as a disc jockey on KPMC. In 1953, he, Bill Woods and Herb Henson put together a local TV show called The Cousin Herb Trading Post Show on KERO-TV Bakersfield (then channel 10), where he became affectionately known as Billy The Kid. The signal from that show was so strong the show could be seen as far as Fresno, all the way over to the central coast and Los Angeles. The show was wildly popular because it not only featured fledgling acts such as Buck Owens, Merle Haggard, Tommy Collins, Jean Shepard, Bonnie Owens, Ferlin Husky, but many national acts such as Hank Williams and Patsy Cline. He stayed with the show for thirteen years.
In 1955, Billy Mize began to appear on a loca Los Angeles television show hosted by Hank Penny. By 1957 he was working on seven different weekly shows in the LA area, including the Hank Penny Show, Cal Worthington Show, Country Music Time and the legendary Town Hall Party. He recorded for Decca (Solid Sender/It Could happen - 1957), Challenge and Liberty, finally hitting the country charts in 1966 with You Can't Stop Me for Columbia. That year he began hosting and performing on Gene Autry's Melody Ranch network show on KTLA as well as starting his own syndicated Billy Mize Show from Bakersfield. During the next decade he managed eleven chart hits as well as writing hits for others such as Who Will Buy The Wine (Charlie Walker), My Baby Walks All Over Me (Johnny Sea) and Don't Let The Blues Make You Bad (Dean Martin). Dean Martin cut three of his songs in one day in June 1966, including "Terrible Tangled Web."
source: Wikipedia

Richard Weize Archives is exclusive distributed by H'art / Bertus. www.hart.de/home-en.html
Record dealers in the USA can get our releases directly from: www.allmediasupply.com and www.aent.com
2
What's This
Advertisement