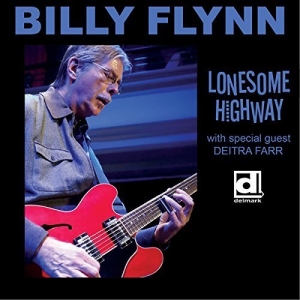 
From sharing the Apollo Theater stage with Keith Richards, Eric Clapton, Billy Gibbons and others to backing Beyonce Knowles at Barack Obama’s Neighborhood Inaugural Ball and on her Grammy winning single from the movie Cadillac Records; from his prolific sideman work to his ten albums as a leader, Billy Flynn is a true-blue heir of Delmark’s storied legacy. Lonesome Highway features 16 new original songs and special guest vocalist Deitra Farr! Producer Dick Shurman says of the set, “It’s one of the great Chicago blues guitar albums.” Kim Wilson, who regularly calls Billy for sessions, observes that “Billy Flynn is one of the greatest blues guitarists alive and one of the greatest to ever live. He is truly the musician’s musician.”


Considering the number of Delmark albums Billy Flynn has contributed to, never mind that he has been performing blues in Chicago at the highest level for more than four decades, it’s hard to believe that this project is his first for the label as a leader. Even a glance at the catalog, with titles from Otis Rush, Jimmy Dawkins, Yank Rachell, Luther Allison, Magic Sam, Mighty Joe Young, and Johnny B. Moore, to name a few, paired with a quick listen to Lonesome Highway, leaves no doubt that Flynn ¬ – who played with many of his predecessors – is a true-blue heir of the label’s storied legacy.

Producer Dick Shurman says of the set, “It’s one of the great Chicago blues guitar albums.” That proposition can scarcely be a surprise to anyone familiar with Billy’s music. Billy is legitimately a master stylist and an in-demand guitarist in the genre. Kim Wilson, who regularly calls Billy for traditional blues sessions, observes that “Billy Flynn is one of the greatest blues guitarists alive and one of the greatest to ever live. There's not much he doesn't know about the blues and many other kinds of music. He is truly the musician's musician.” Big Jon Atkinson says simply, “There’s no one like Billy Flynn, from lowdown to uptown, one of the heaviest players I have ever heard."

Inspired and encouraged as a teenager in the 1970s by interactions with Jimmy Dawkins, Johnny Littlejohn, Jimmy Rogers, B.B. King, and others, the multi-instrumentalist (he plays guitar, harmonica, and percussion on Lonesome Highway) today maintains a busy schedule as a regular on bandstands in Chicago, touring in the United States and performing on Europe’s most prestigious festival stages. He played a key role at the star-studded Howlin’ For Hubert benefit concert at the Apollo Theater in 2012, sharing the stage with Keith Richards, Eric Clapton, Billy Gibbons and many others, and was on the backing track for Beyoncé Knowles’ vocals at President Barack Obama’s Neighborhood Inaugural Ball in 2009. “That was a great moment, the very beginning of the Obama administration. Michelle and Barack, at their party, danced to ‘At Last.’ They danced to my guitar!”

That inaugural performance was from Billy’s work on the soundtrack of Cadillac Records, in which Beyoncé portrayed Etta James. “With Beyoncé, I won the Grammy Award for ‘At Last,’ for Best Traditional R&B Vocal Performance.” Pinetop Perkins and Willie Smith recorded Billy’s song “I Would Like to Have a Girl Like You” on their 2011 Grammy-winning album, Joined at the Hip. In addition to session work for Delmark and others, including 10 solo albums that cover every shade of blues (and include two full CDs of original rock and roll guitar music – “surf,” to Billy), Flynn has played on countless records, from his early work as a member of The Legendary Blues Band and milestone recordings with a host of Chicago blues greats, through classic live albums with Kim Wilson, to the recent, high-profile projects Muddy Waters 100 and Chicago Blues: A Living History.

On his first Delmark album, Flynn’s songwriting is sensitive and clear in interpreting his influences, which range from string bands and raw boogies through early rock and roll, the first bloom of postwar Chicago blues, and the sleeker sounds of the ‘50s, ‘60s, and ‘70s, with other important roots in R&B, funk, and soul jazz. Billy’s version of The Ramsey Lewis Trio’s hit “The In Crowd” is the set’s only cover. The other 16 songs are Flynn compositions. With typical modesty, he explains, “It’s kind of showcasing me being a songwriter too. They’re stories I put together, ideas I get from people that I meet and things I see.”

The special instrumental signature Flynn achieves elevates Lonesome Highway to the level of guitar greatness Dick Shurman promised. Billy’s perfect rhythm guitar parts are always hip and often ingenious. His vocabulary and taste place him among the idiom’s most expressive and authentic players; his tone and feeling make him one of the most identifiable. Fellow blues guitar greats understand his alchemy. Kirk Fletcher: “Billy Flynn is amazing. He can come from so many different directions, and make it all his own. I love that guy!” Even as he channels Otis Rush, Jimmy Reed, J.B. Lenoir, Robert Nighthawk, Earl Hooker, Chuck Berry, Jimmy Dawkins, Fenton Robinson, Eddie Taylor, and Freddy, Albert, and B.B. King, Billy Flynn is always fully present as a creative force. Success in that balancing act is the essence of artistry in a traditional style of music.


"We are extremely excited to present the much anticipated, long past due Delmark debut recording as a leader from one of the most talented blues musicians in the world, the one and only BILLY FLYNN!

Although Billy is probably more known for being the first call guitarist to so many legends (Jimmy Dawkins, Billy Boy Arnold, Kim Wilson, Mississippi Heat, James Wheeler, Willie Kent, Legendary Blues Band, Cash Box Kings, Jody Williams, Willie Smith, Little Smokey Smothers, and more,) he's been leading his own group for decades and has developed into a killer vocalist and songwriter supreme, becoming a living legend of the blues world himself. He has a devastating mastery of so many roots musical styles & instruments, and a deep, encyclopedic knowledge of the blues. He is also one of the most passionate, dedicated, sincere, unselfish, and friendly musicians you'll ever get a chance to meet. BILLY FLYNN absolutely lives and breathes music, is always eagerly learning more, and has an infectious enthusiastic, positive, & fun loving attitude that joyously comes through in his music.

Billy can eerily channel so many of the blues masters, all while adding his own personal flourishes & style on lead & rhythm guitar, percussion, & harp! On the killer title track you can hear Otis Rush, Jimmy Dawkins on "If It Wasn't For The Blues," Earl Hooker on "Small Town," John Lee Hooker on "Waiting Game," Robert Nighthawk on "Jackson Street." Billy always absolutely slays on unique, rockin' instrumentals - how 'bout his wild take on "In" Crowd and his catchy "Blues Express!" Billy's handpicked all-star Chicago blues band are all the best at their instruments, including the world class blues chanteuse, DEITRA FARR. Big shout out to the horn section, too - check out Doug Corcoran's south of the border trumpet on the Otis Rush styled minor masterpiece, "Lucky Kind!"

This recording is dedicated to Billy's dear friend, father figure, & musical mentor, the legendary Jimmy Dawkins, who Billy started playing with as a teenager. Many of these songs' beginnings were shared with Jimmy for advice before he passed away in 2013. "
- Kevin Johnson, Delmark blues promotions

Dedicated to Jimmy Dawkins who was my friend, father, and teacher. His family remains my family. His Delmark recordings inspired me, then he helped and encouraged me with more things than I could list. I am honored to follow in Jimmy's Delmark footsteps with this recording.

Special thanks to Mary Flynn, Dick Shurman for his set lists, to Steve Wagner for his patience and understanding, Bob Koester who started it all for so many, the Delmark staff, Dave Katzman and Frank Corpus.

In remembrance of a master--Barrelhouse Chuck.