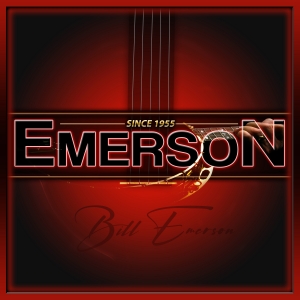 2019 Hall of Fame inductee Bill Emerson is back with the first single with his son Billy Emerson with Ophelia.

The 615 Hideaway Records is proud to announce the signing of Bill Emerson and will be putting out the new album EMERSON. Bill with his son Billy are excited to keep making music together. “Bill Emerson is a living legend and still has that magic touch. We are working around some 2020 blues and not rushing the music. When we can get Bill in the studio to record, we will.” – Sammy Passamano III

Bill Emerson joined Buzz Busby and the Bayou Boys in the 1950s. In 1957, when Busby was injured in a car accident, Emerson and Charlie Waller – who was also a member of the Bayou Boys – formed The Country Gentlemen. Emerson's stint with the Gentlemen lasted until 1958 when he left the group and began working as a sideman. In 1962, he joined Jimmy Martin's Sunny Mountain Boys where he remained until 1967 with the exception of a brief interlude with Red Allen between 1964–1965. In 1967, Emerson and guitarist Cliff Waldron formed "Emerson & Waldron" recording for Rebel Records. The sound and repertoire of Emerson & Waldron was very similar to The Country Gentlemen often performing songs from contemporary rock, soul and country. Three years later, in 1970, Emerson was back with The Country Gentlemen. In the absence of Emerson, Waldron renamed the group "Cliff Waldron and the New Shades of Grass. When Emerson joined the Navy in 1973 he also joined the United States Navy Band performing with them for the next twenty years with their bluegrass ensemble Country Current. In 1992, the Stelling Banjo Company issued an Emerson signature banjo model.