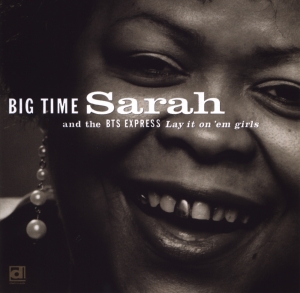 For two decades Sarah has been a mainstay of north side blues clubs. In 1989 Sarah formed the BTS (for ‘Big Time Sarah’) Express, a powerhouse young band that fused elements of soul, funk and jazz with blues. “The mens get a better break than the womens. They get a better chance at getting a record out and they get more jobs…It’s time to show a man our showmanship, our courage and what we can do,” Sarah reminds us. “We out there to get know, too.” Go ahead and lay it on ’em Sarah — big time!


Big Time Sarah was recently layin' it on 'em at Chicago's B.L.U.E.S. Etc. for her 40th birthday party, and she was in full swing.

"Well, I woke up this morning," she sang in her husky, warm vibrato, "And I found my baby gone." Then in one of her frequent and illuminating asides she added, "Oh, he's out cheatin' again!" and, "I'm gonna let it all hang out tonight, baby!"

Much of a story can sometimes be found in the space between the phrases, in the twist of a hip-or even, in Sarah's case, between the songs themselves: "You mens know how to bark: Y'all ain't nothin' but dogs anyway!" The audience eats this up-or perhaps in some cases, laps it up.

Part of Sarah's prodigious talent lies in knowing how to exploit the inherent tensions between men and women. Her stage shows revel in illustrating the gulf between desire and fulfillment and in exposing the inequities of male/female relationships. She is quick to point out, too, that those inequities carry over to the business world.

"It's too male dominated," says Sarah in a quieter moment. "The mens get a better break than the womens. They get a better chance at getting a record out and they get more jobs."

With this new release, Sarah is out to lay it on 'em and help set the record straight.

"Big Time" Sarah Streeter was born on January 31, 1953 in Coldwater, Mississippi. She came to Chicago at the age of seven and received her early training singing in church choirs on the South Side. At 14 she took the stage at Morgan's lounge on 61st Street in her debut as a blues singer. "It was with the Aces," remembers Sarah, "Dave and Louis Myers, Fred Below-:-and Jimmy Johnson was with them then on guitar. I sang Stormy Monday."

Encouraged by that early experience, Sarah began to sit in at other South Side spots: Louise's lounge at 69th and King Drive with Johnny Bernard and his band, at the Checkerboard lounge with Buddy Guy and Junior Wells, and Florence's with Magic Slim.

But Sarah credits Sunnyland Slim, whom she first met in 1976, with helping her the most. "My aunt was going with a friend of his," says Sarah, "and we went to see him at Wise Fools [a North Side Chicago club]. I almost got pneumonia' cause it was snowing that night. The next day we went to his store and we talked."

After that meeting Sarah began to sit in often with the generous old patriarch of Chicago blues and in June, 1977 she accompanied him as vocalist for a six week tour of California, where, because of her grand ambitions, she was given the nickname "Big Time" by her fellow musicians. In August they toured Europe. Soon afterward she recorded a 45 for Sunnyland's Airway label, and her career was under way.

She made annual trips to Europe with pianist Erwin Helfer from 1978 to 1982. And since then she has travelled extensively, returning to Europe on many other packages. She has performed at The Mexico City Blues Festival and in 1984 she appeared on the first annual Chicago Blues Fest.

For two decades Sarah's been a mainstay at north side clubs like Elsewhere, B.L.U.E.S., Biddy Mulligan's, Lilly's, Kingston Mines, and the Piano Man, first singing blues behind local piano players and later fronting her own band.

In 1989 Sarah formed the B1'S (for 'Big Time Sarah') Express, a powerhouse young band that fused elements of soul, funk and jazz with blues. The latest incarnation of the B1'S includes arranger/guitarist Rico McFarland, who proves he's well-versed in classic Chicago blues and anything else Sarah lays on the band, whether it's her own compositions, or something from B.B. King, Bill Withers, Dinah Washington, or Gershwin-examples of which we are treated to on this release.

Perhaps the most revealing material on here are the four numbers written by the late Willie Dixon and given to Sarah after Sunnyland introduced the two.

"On his letter and tape he said, 'I promised you these songs and here they are. If you can do something with them, go ahead.' "

She's done something with them all right. Three of them, written from a modern woman's perspective, are a testament to Dixon's great legacy and songwriting ability. The fourth, I Make Love, could be sung by either a man or woman-though many listeners may argue that point after hearing Sarah's interpretation. Hoochie Coochie Woman, Dixon's parody of his own great classic, acknowledges a female sexuality equally potent to the original Hoochie Coochie Man's. Lay It On 'em Girls, the title track, speaks of women's empowerment and assertiveness. And the final track, Every Man I See, is Dixon's eyes-wide-open view of the state of modern sexual affairs. "Every man I see," sings Sarah, "look good to me." But it's not so simple: "In your arms I could have it made, but I'm afraid you might have AIDS." Here we have the fantasies and the realities of modern romance and sexual politics as envisioned by Dixon and ably interpreted by Sarah. Very modern blues written by an old master lyricist and sung by a veteran blues singer with roots in both traditions.

"It's time to show a man our showmanship, our courage and what we can do," Sarah reminds us. "We out there to get known, too."

Yeah, Big Time Sarah's layin' it on 'em, tellin' 'em just exactly who she is and what she's all about. She's layin' it all out there in her big time way, and honey, y'all better deal with it.

"Big Time" Sarah Streeter has the power, struttin' tone, and booming voice ideal for stomping, sassy numbers. This CD spotlights the band Streeter formed in 1989, the BTS Express. Her songs explore the familiar battle between the sexes, with Streeter sometimes angry, sometimes confused, and often confrontational in the "classic" blues style. She covers three numbers by Willie Dixon, as well as material from Bill Withers, George Gershwin, and Leonard Feather, and displays both a vibrant style and more versatility than might be expected.