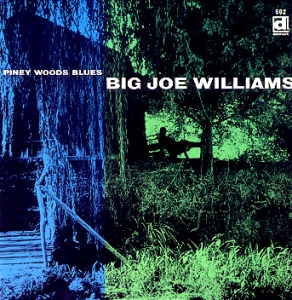 Between the boards of this album will be found the music and the personality of Joe Lee Williams, traveler, musician, vocalist, composer, lover of life, teller of tales and dealer in mysteries. When Piney Woods Blues was first released in 1960 his exact whereabouts were unknown. On this album, his first as a leader, Joe played a battered six-string guitar with one of the tuning pegs damaged beyond repair. He added a flange with four additional pegs to make his unique 9-stringed instrument. The important thing is that Joe knows where to find the notes he wants – and that he always seems to want the right one for the emotional content of the lyrics he happens to be singing.

In all fairness, we must point out that Joe Williams on this recording is not the former Count Basie band vocalist but one of the few remaining blues men of a generation of folk artists [as opposed to folk singers (i.e. singers of folk songs) of the concert circuit] who are disappearing much too rapidly from the subterranean world of the blues just as a new audience is accepting the form as a valid, serious and altogether worthy art. This new audience is composed of folk song fans who find more meaning in the blues than in the old Old English ballads, etc.; of modern jazz fans discovering the roots of their music; of traditional jazz students following the development of New Orleans jazz back to this well-spring of folk expression; and of college-age ex-rock-and-rollers. As the blues receive more and more exposure, a fifth sector is developing: persons who, exposed to the blues, develop a liking for the form even if they have no particular appreciation of other folk music or of jazz.

In spite of all this recent interest, research, discovery and recording activity; there has always been a wide audience for "deep blues." During the height of the rock 'n ' roll craze, many small independent recording companies continued to supply single records to the Southern minority market that demanded this more honest music. A few authentic blues singers even managed to reach a wide audience with the aid of gimmicks of arranging, accompaniment and recording technique.

There are many shades of coloration, many nuances in the blues. They were hummed by slaves, hollered after emancipation, shouted in the big cities over the din of boisterous honky-tonk crowds. They were chanted in church on Sunday morning. At other times they were moaned in pain and grief, desperation and heart sickness. St. Louis women whined them on vintage recordings. This blues coloration, this "note of pain" as Leonard Bernstein has called it, gives jazz its grass roots. Today's blues men influence not only jazz but popular song and religious music.

Legend after legend has arisen out of the vaguely-documented history of the blues: of Ma Rainey and her students, of Bessie Smith's last ride, of Blind Lemon's tin cup and cane, of Leadbelly's pardon, of the artistic vision of blind men, the travels of the physically handicapped, of the gin mills, work camps, prison gangs, speakeasies, highways, railways, dusty roads, bus lines, vices, virtues, diseases, weaknesses, strengths, of the men and women who populate the world of the blues lyricist. We many never actually feel the whiplash of the prison overseer, know the sting of undisguised hatred, the slow death of TB, or the frantic narcotic high;; but in a very real sense, we all experience to some degree the emotions, occurrences and locales of the blues. We all must eat, drink, love, hate, fight, lose, win . . . experience loneliness, frustration defeat, bitterness, satisfaction, and happiness in our life. Like all great art, blues mirror the good and the bad, the bright and the dull shades of human experience.

The blues are colloquial. They are sung in sometimes unintelligible accents, because they are the naked, unpolished, expression of unpretentious people. But great poetry is uttered in blues lyrics. metaphors loaded with layers o meaning. Humourous double-entendre. Beautiful imagery. Powers of description and phrasing worthy of study in anybody's literature class.