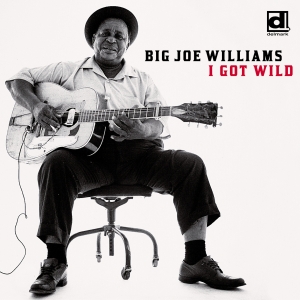 Country blues at its best from the master of the nine string guitar. This is the first new Big Joe Williams album on Delmark in 30 years. It features recordings made in St. Louis from 1958 which also gave us Piney Woods Blues (Delmark 602) and Stavin’ Chain Blues (Delmark 609), and from recordings made in Chicago from 1961 which also gave us Blues On Highway 49 (Delmark 604) and Nine String Guitar Blues (Delmark 627). Bassist Ransom Knowling accompanies on three songs and their studio banter is priceless! More blues tales from one of the greatest story-tellers of all time.

On one of his later visits to St.Louis in 1956, Big Joe Williams heard about a white kid out at Delmar and DeBalivere who was interested in recording old blues artists. He brought along an old Columbia flyer to prove he was the real Joe Williams and not the young upstart who sang with Basie. His voice would have sufficed - I already had most of his 78s. Complete notes by Bob Koester enclosed.