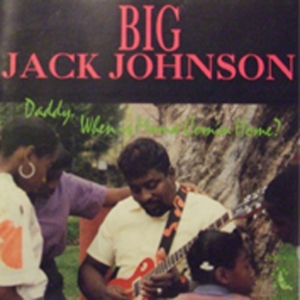 Contemporary Mississippi blues doesn’t get any nastier than in Big Jack Johnson’s capable hands. The ex-oil truck driver’s axe cuts like a rusty machete, his rough-hewn vocals a siren call to Delta passion. But he’s a surprisingly versatile songwriter; Daddy, When Is Mama Comin Home?, his ambitious 1990 set for Earwig, found him tackling issues as varied as AIDS, wife abuse, and Chinese blues musicians in front of slick, horn-leavened arrangements!

Big Jack Johnson was a chip off the old block musically. His dad was a local musician playing both blues and country ditties at local functions; by the time he was 13 years old, Johnson was sitting in on guitar with his dad’s band. At age 18, Johnson was following B.B. King’s electrified lead. His big break came when he sat in with bluesmen Frank Frost and Sam Carr at the Savoy Theatre in Clarksdale. The symmetry between the trio was such that they were seldom apart for the next 15 years, recording for Phillips International and Jewel with Frost, the bandleader.

Chicago blues aficionado Michael Frank was so mesmerized by the trio’s intensity when he heard them playing in 1975 at Johnson’s Mississippi bar, the Black Fox, that Michael Frank eventually formed Earwig just to capture their steamy repertoire. That album, Rockin’ the Juke Joint Down, came out in 1979 (as by the Jelly Roll Kings) and marked Johnson’s first recordings as a singer.

Johnson’s subsequent 1987 album for Earwig, The Oil Man, still ranks as his most intense and moving, sporting a hair-raising rendition of “Catfish Blues.” The ’90s have been good to Big Jack Johnson. In addition to Daddy, When is Mama Comin Home?, he released a live record and two studio albums — 1996′s We Got to Stop This Killing and 1998′s All the Way Back. He also appeared in the acclaimed film documentary Deep Blues and on its resulting soundtrack, returning in 2000 with Roots Stew.