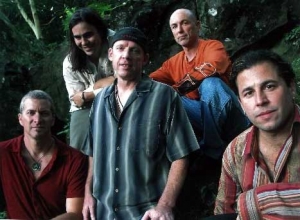 Eric Rigler and Bad Haggis are an unexpected combination of instruments, musical styles and personalities like the namesake dish that one fan described as a bag of sinister byproducts wrapped in a dubious membrane made possible by generous animal organ donors,

The brainchild of master piper Eric Rigler, Bad Haggis formed in 1998 and has produced Ark, Trip and Wine Dark Sea CDs as well as a live studio DVD, Span. From a base in Los Angeles the band tours regionally, nationally and internationally. Theyve appeared in Scotland and Spain where their concerts were recorded, filmed and aired by the BBC and Spanish TV.

Bad Haggis is Just Plain Folks' Group of the Year for 2006-07 and the winner of five JPF Awards. JPF is a 40,000-member music industry peer group similar to the Grammy Awards.

"World's most recorded" bagpiper Eric Rigler, whose work is heard on more than 50 film scores, more than 100 recordings and scores of television shows and special televised events, is in demand at recording studios from Hollywood to Nashville to Abbey Road and prized for his ability to improvise. Hes joined by lead guitarist Mike Hoffmann, bass guitarist/vocalist Mick Linden, Rogerio Jardim on drums/vocals and Alberto Lopez on ethnic percussion.

A high-energy band in live concerts as well as on recordings, Bad Haggis delivers original material with a sonic twist and infectious good humor, consistently bringing audiences to their feet.

...Rigler and his unisonant mates traverse and merge styles as gleefully as kids set loose in a musical Disneyland. Combining Celtic, African, Rock, Jazz, World Beat and nearly any other piping hot genre to toss into its tasty concoction, Bad Haggis is indubitably a kitchen sink of creativity. -- Dirty Linen