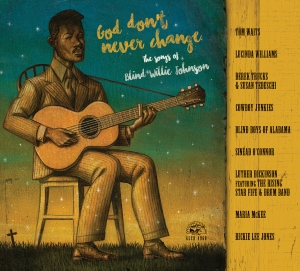 In 1977, NASA sent the Voyager 1 spacecraft on a one-way trip out of our galaxy and into the far recesses of outer space. The hope was that one day some other lifeform would come upon it and gain some insight into the essence of mankind. To that end, a gold record and player were included, featuring sounds and music to illuminate the human condition. Included on that record-along with a recording of a human heartbeat and music by Beethoven and Bach-was Blind Willie Johnson's haunting and ethereal "Dark Was The Night-Cold Was The Ground," a timeless representation of the humanity of Earth's inhabitants.

Blind Willie Johnson recorded a total of 30 tracks for Columbia between 1927 and 1930, creating a priceless legacy. He created unforgettable music by marrying the raw gospel fervor of his vocals with the steely blues fire of his guitar. His songs were mostly traditional or came from hymnals, but when Johnson performed them, his soul-shaking voice and amazing slide guitar transformed each one into something wholly original. Johnson was among the best-selling black gospel artists of the era, but the Great Depression ended his recording career.

Rock fans will no doubt recognize many of Johnson's songs, which have been recorded over the years by artists ranging from Led Zeppelin to Eric Clapton to Bob Dylan. Johnson's recording of "John The Revelator" was included in The Anthology Of American Folk Music, archivist Harry Smith’s six-LP collection released in 1952, that set the folk music revival of the 1950s and 1960s into motion.

According to Luther Dickinson, "Blind Willie Johnson touches everybody. His music is so of the earth that it still sounds completely modern. It's timeless and like nothing else ever recorded. If we could hip anybody to Blind Willie Johnson, their lives would be enriched for sure."

Derek Trucks wholeheartedly agrees, saying, "I never heard a slide player, even to this day, play with that much emotion. I've only heard a few things that have hit me quite that strongly. There's something so honest about his recordings. He's one of the few handful of musicians whose music really feels sacred to me. Johnson's songs, lyrics and the ability to pair the slide with the voice were amazing. It feels like it came out of a different world."

Produced by Jeffrey Gaskill (producer of the twice Grammy-nominated compilation, Gotta Serve Somebody: The Gospel Songs of Bob Dylan), God Don't Never Change: The Songs Of Blind Willie Johnson highlights the music of one of the most charismatic and influential slide guitarists and vocalists who ever walked the Earth. As Gaskill states, "Blind Willie Johnson's music is imperishable. His music speaks to us as it laments the human condition; it speaks to us as it praises the steadfastness of an unchanging God. It travels through time with the same bold call of repentance that was once delivered to listeners on Texas street corners. Ultimately, it is the message that endures." God Don't Never Change: The Songs Of Blind Willie Johnson is, according to Gaskill, "my life's work." The project was years in the making, and Gaskill is thrilled that it's finally ready to be released. "You gotta serve somebody," he says, referencing his earlier compilation, "and I got the songs of Blind Willie Johnson."

Johnson's life has been shrouded in mystery, but scholars, most notably the album's liner notes author, Michael Corcoran, have unearthed a few details. Born in Pendleton, Texas in 1897, Johnson grew up around Marlin, Texas. A legendary story has his stepmother, in a fit of rage, throwing lye in his face when he was a child, blinding him for life. From his teenage years, he traveled the region as a street singer, moving between Dallas, Galveston, Houston, Corpus Christi, San Antonio (even travelling as far as New York City) and finally settling in Beaumont, where he thundered out his street corner evangelism, spreading his sacred message through his transfixing music. He died in 1945 in Beaumont, Texas at the age of 48.

On God Don't Never Change: The Songs Of Blind Willie Johnson, each artist sounds as if he or she was born to preach Johnson's gospel. The collective work is much more than a simple 'tribute' album. These eleven performances are a powerful and cohesive affirmation of faith as deep as the soul of a man, with an eternal message that is as boundless as the dark, cold night at the farthest edge of the universe.