While No One Was Looking - 20 years of Bloodshot 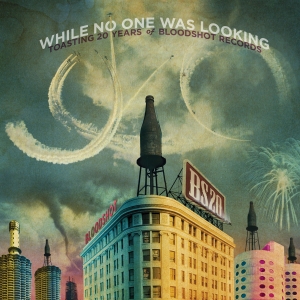 “Success on someone else's terms don't mean a fuckin’ thing…”

So shouted Jon Langford in "Over the Cliff" on Bloodshot's first album, 1994's For A Life of Sin.

It was true then, and it's even truer now.

With a heady brew of resilience, stalwart dedication, Cervantes-level delusion and mulish determination on behalf of music and artists we love, and luck—serendipity, even—Bloodshot Records has improbably survived 20 years in the venal snake pit that is the music industry.

As an indie label operating on the fringes, we try to keep our eyes forward and ignore and avoid the chaos, distractions, inanities, and indifference on the peripheries of the biz and bring to bear our ingrained, Chicago stacker-of-wheat work ethic. The pay is low, but at least the hours are long, and there's never been an expectation of longevity; there's always been some new hurdle to climb over or problem to solve. Still, after all this time, we wake up in the morning (or, er, sometimes afternoons) excited about new music we've heard, a new band we've seen, some minor victory in the battle to dent the world's ever-shortening and shallowing attention span.

At times, it feels like we're tossing bottles into a pond: some bob around; some drift into eddies or out of sight in the weeds; some splash the old guy fishing off his pier and yelling "hey you maniacs, you can't do that;" some get run down by drunken yahoos in their speedboat; some just sink. And, sometimes, one hits the current just right and floats off to amazing, unexpected places. The secret to (or madness in) our longevity is our will to keep on tossing.

Now, 20 years later, we're looking around with a bit of stunned "How'd THAT happen?" look on our faces. And how to best mark this auspicious, multiple-of-10 occasion? Retrospectives aren't our style, neither are "Best Of" collections. So, we reached out to a few artists and floated the idea of covering songs from our ample catalog because we thought it would be cool to hear what might happen. The speed, sonic breadth, ingenuity, and diversity of responses took us all by surprise. We heard from old friends, new friends, friends we didn't know we had, and even a few heroes of ours (Holy ****! Mike Watt knows who we are?). Some told stories of being fans for years, hearing about us or our artists from working in record stores, their college radio stations or being on tour with them; some got turned on through friends or seeing them open for someone else, or from following the Mekons forever.

As different as all their stories are, the weird and winding paths that brought these artists to our drab little stretch of Chicago’s Northwest Side snake from all over the sonic spectrum. 38 songs from the Bloodshot catalog reemerge in oft-head-craning styles from gritty punk to back porch folk, dark bedroom new wave to straight up honky tonk, and lush power pop to new emo.

Thus, a half-cocked idea (not our first, trust us on that…nor likely our last…) blossomed into the triple LP/double CD thrill ride While No One Was Looking: Toasting 20 Years of Bloodshot Records.

Some picks are naturals and some surprising; some folks go deep catalog, and some pick the "hits." Some choose big names like Ryan Adams, Justin Townes Earle, or Neko Case, and some shine a novel light on loveable and grievously under-appreciated cult heroes like the Meat Purveyors and Devil in a Woodpile. Some offer faithful versions; some bring their own particular bent, and some completely re-imagine or dismantle the material and take them places it'd never occur to us that they could go.

What they all have in common is that somewhere, somehow, and in some way, something we had a hand in resonated with them. Turns out, you never really know how or where the ripples from those bottles we've been tossing will hit the shore.
8
What's This
Advertisement