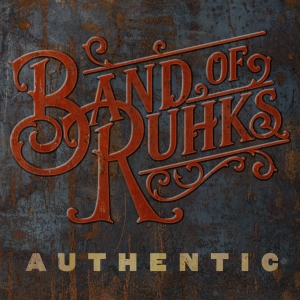 What is a Ruhk? The original spelling of “rook,” the word has been used in several different contexts, used to refer to everything from the popular chess piece to chariots in Persia, and most famously, the ominous black bird of death and misery. In roots music, “the Ruhks” appropriately refers to the Band of Ruhks, a group of bluegrass veterans whose music has the ability to exhibit chess-like skill, the fiery speed of a chariot, or the authority of a bird of prey.

Comprised of Ronnie Bowman (bass), Kenny Smith (guitar), Don Rigsby (mandolin) and Brian Fesler (banjo), Band of Ruhks is a supergroup that straddles the line between bluegrass favorite and roots music trailblazer with ease. The band’s sophomore album (produced by Ben Isaacs), and first for Rebel Records, is a showcase of the group’s love for bluegrass, while greeting the future with a sneaky grin. Appropriately entitled Authentic, the album is filled with nearly all originals.

Ronnie Bowman is one of bluegrass music’s most beloved vocalists of the past three decades (three-time IBMA Male Vocalist of the Year), and his songwriting is among the most revered in bluegrass and country music today. On Authentic, his smooth baritone sounds right at home on everything from the sweet (“Heartstrings”) to the sinister (“If You Want To Know My Name”) showcasing why he is one of the most versatile bluegrass singers of his generation. Don Rigsby has one of the “highest and lonesome-est” voices in bluegrass. On Authentic, his voice shines on the Reno & Smiley classic, “There’s Another Baby Waiting For Me Down The Line” as well as on new favorites such as “My Ol’ Tattoo,” “Detroit” and “Run Fanny Run,” the album’s debut single. If there is anyone who doesn’t believe Rigsby is still one of the most gifted singers in bluegrass, his performance on the Rigsby-composed, “Where I Belong” should remove any doubt.

Kenny Smith (of The Kenny & Amanda Smith Band) is an absolute guitar giant (two-time IBMA Guitar Player of the Year). His style is often imitated but never duplicated and helped shape the blueprint for bluegrass guitarists over the last 25 years. His work in expanding bluegrass guitar continues on Authentic. His fingers fly on the new traditional toe-tapper “Charming Betsy” and the album’s lone instrumental “B N Me”, but his six-string helps anchor the band as it charts its course through bluegrass and beyond throughout the album. Brian Fesler played banjo with The Lonesome River Band in the late 1980s and even appeared on one of the band’s early albums (Rebel Records’ Saturday Night, Sunday Morning). His powerful right hand is a perfect fit for the Band of Ruhks, rounding out a veteran group whose passions are similar, but express themselves in diverse ways.

Collectively, these veteran musicians account for over a century’s worth of combined experience in music. The Band of Ruhks could be a case study of the old adage “the sum is greater than the parts.” The harmonies between Bowman, Rigsby, and Smith are nothing short of remarkable and the musical chemistry between these four modern masters cannot be denied on Authentic.