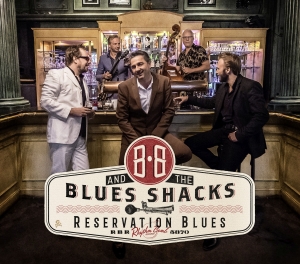 B.B. & The Blues Shacks – Reservation Blues
Celebrated on all continents for nearly 30 years B.B, & The Blues Shacks are the European export of traditional Rhythm&Blues.
With up to 4000 concerts worldwide the band has achieved a huge fanbase and can look back on 13 album releases since 1994.
Now the band has found a new home at Rhythm Bomb, returning to their creative roots with their new album. Whilst their love for Soul was never in doubt in the past, this new release sees the quintet return to what they have mastered like no other formation since their foundation: exquisite Vintage Blues and 50s Chicago Blues coupled with swing, Jump and driving shuffles. “Reservation Blues” contains 14 original compositions which are complemented by an outstanding horn section on 4 tracks

B.B. & The Blues Shacks
28 years together, many tours around the globe, thousands of shows and a dozen of albums under their belts, these guys are the real deal. They play their music so well that that it's hard to believe BB AND THE BLUES SHACKS are actually from Germany. Their mixture of blues and rhythm and blues with a touch of early soul, gave the band a solid base of faithful fans all over Europe, America and the rest of World.
The band received numerous awards such as the "German Blues Award" and the title "best bluesband of Europe" by French music editors, their CD "Unique Taste" was honored with the award of the German record critics.
B.B. & The Blues Shacks stand for great live performances and have also established themselves as a top act overseas.
They played in Dubai, at the Doheny Festival in Los Angeles, and at the Byron Bay Festival in Australia with artists like Bob Dylan, B.B. King and Elvis Costello before tens of thousands.
Frontman Michael Arlt (vocal and harp) has long been one of the first European blues and souls vocalists. He is also a unique entertainer. His brother Andreas Arlt is an elegant stylist and is now traded as a world-class guitar player.
With Fabian Fritz on the piano and the organ, the band was able to commit another genius for the independent sound. Henning Hauerken (double bass and bass guitar), and Andre Werkmeister (drums) deliver the unique drive and groove that you can take home from the concert.
19
What's This
Advertisement