Billy Boy Arnold - Back Where I Belong 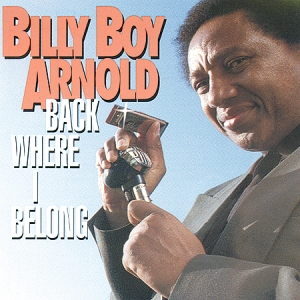 Billy Boy Arnold was born in Chicago on September 16, 1935. Unlike the many blues artists who migrated to Chicago from the South, Arnold is among the first generation of bluesmen actually born and raised in the city. He fell in love with the blues at an early age and was especially moved by the records of the first Sonny Boy Williamson. In 1948, young Billy found out that Williamson lived nearby, and he set out to find him. "To me, this was a burning desire-I wanted to be like Sonny Boy," recalls Billy. Williamson took a liking to the young fan and revealed his trademark style of "choking" the harp to Billy. Shortly after their third visit together, Williamson met his untimely death. But the few visits were enough to make Billy determined to become a bluesman. In the ensuing years, Arnold befriended many of the local blues legends, and he began to learn everything he could about the blues. Blind John Davis, Big Bill Broonzy, Memphis Minnie, Muddy Waters, Johnny Jones, Johnny Shines, Otis Rush, Little Walter, and Earl Hooker all played a part in Arnold's musical education.

In 1952, the teenaged Billy landed his first recording contract with Chicago's Cool label. It wasn't until his first record came out (“I Ain't Got No Money” b/w “Hello Stranger “) under the name "Billy Boy Arnold" that he realized he had a nickname, "I didn't like it at first," recalls Billy Boy." I was 17 and looked 15 but told people I was 19, so I didn't want to be known as a boy. I wanted to be a man." Though the recording was admittedly immature, the name stuck, and Billy Boy Arnold was on his way.

While still a teenager, Arnold hooked up with a young street musician/electronics buff named Ellis McDaniel (Bo Diddley) who fashioned an amplifier for Billy Boy out of an orange crate. Billy Boy eventually talked Diddley into auditioning for Chess Records. In 1955, with Billy Boy playing his signature "stop time" harmonica, Diddley scored the first of his many hits for Chess with Bo Diddley/I'm A Man. The future looked very bright, but Billy Boy didn't want to be a sideman. He wanted to make records under his own name.

After a misunderstanding with Leonard Chess (Bo Diddley told Arnold that Leonard didn't like him), Arnold crossed the street to the offices of VeeJay Records, where he was promptly signed. He recorded “I Wish You Would” (reportedly the first blues session to feature an electric bass), and it quickly became a regional hit. He was playing across the South Side of Chicago with stars like Little Walter and Junior Wells, and local radio airplay for his song was heavy. Even the great Muddy Waters took a liking to the young bluesman. "You made a good record," Waters said of ‘I Wish You Would.’ "You keep on making those good records." And that's just what Billy Boy did: I Ain't Got You, She's Fine, She's Mine and Prisoner's Plea followed. Although only 20 years old, Billy Boy Arnold had arrived.

Arnold continued to play the Chicago clubs and record 45s throughout the late 1950s. His debut album, 1963's More Blues From The South Side for the Prestige label, remains a classic. But the gigs began to dry up, and the difficulty of raising a family and keeping a band together led Arnold to pursue a career as a Chicago bus driver and truant officer and later as a parole officer for the State of Illinois. By the middle of the 1960s, the first generation of British blues bands were taking notice of Arnold's talent-his VeeJay singles became valued collectors' items among the musicians. The Yardbirds and The Animals each had hits with Billy Boy's songs. Later, The Blasters and David Bowie both covered his material. All of this interest led Billy Boy to tour and record in Europe (and play the occasional U.S. festival gig) during the 1970s, 1980s and into the 1990s.

With the release of Back Where I Belong in 1992, Billy Boy Arnold enjoyed the greatest success of his career. "Billy Boy Arnold delivers the goods," exclaimed the Los Angeles Daily News. "Highly recommended," agreed Jazz Times. "Triumphant," added Billboard. Features and reviews ran in magazines and newspapers from coast to coast and in Europe, including Rolling Stone, Audio, CD Review, Living Blues, Blues & Rhythm, The Chicago Tribune, and The Washington Post. Everyone agreed. Billy Boy Arnold had created an album of songs that not only equaled the strength of his early hits, but indeed surpassed them in their maturity and execution.

The strength of Back Where I Belong brought Arnold back into the public eye. Since the album's release, he's played clubs and major festivals in the United States and Europe, including England's Burnley Blues Fest; Germany's Breminale Blues Fest; the Montreal Jazz Fest; Norway's Notodden Blues Fest; Toledo's Rock, Rhythm and Blues Fest; the Chicago Blues Fest; the Poconos Blues Fest; and the Long Island Blues Fest. Performance after performance, Arnold has delighted old fans and made scores of new ones. Eagerly, everyone waited for Arnold's next move.