Aron Burton "Past, Present, And Future" 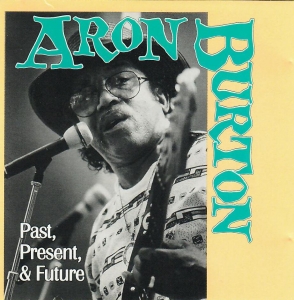 Aron Burton has been hard at work for the past fifty years, securing his place in musical history as a master of the blues, and becoming one of the most sought-after bass players in the business. Born in Senatobia, Mississippi on June 15th 1938, Aron took interest in music at a very young age, when his gospel voice was sought after by many local churches. Among his early accomplishments was the formation of the Victory Travelers with his cousin Ruben Burton, a group that still tours.

Upon moving north to Chicago in the mid-1950s, Aron quickly gained a reputation as one of the most solid and “in the pocket” bass players in town. Aron was exposed to a variety of different styles of music, including r&b, soul, jazz, and rock, in addition to his blues and gospel foundation. It was only a short time before Aron began to be called upon by the masters of the industry, starting in 1956 with Freddie King. Eventually Aron was hired to support such legends as Jimmy Witherspoon, Junior Wells, Big Jack Johnson, Eddy Clearwater, and Billy Boy Arnold.

Perhaps Aron Burton’s biggest claim to fame is as a founding member of Albert Collins’ Ice Breakers, along with his brother Larry Burton and keyboardist Allen Batts. Aron shared several Grammy nominations with the band, and soon became a regular session artist at Alligator Records. He can be heard singing and playing on recordings of such legends as James Cotton and Fenton Robinson.

After his success as a backing musician. Aron finally decided to strike out on his own. He can be heard on solo albums recorded with both Earwig Music and Delmark Records in Chicago. These critically acclaimed albums have secured him four W.C. Handy Awards Nominations, as well as numerous other awards. To date, Aron has appeared on more than thirty-four recordings, has toured internationally, and has performed at nearly every Chicago Blues Festival since the festival began more than twenty-five years ago.
8
What's This
Advertisement