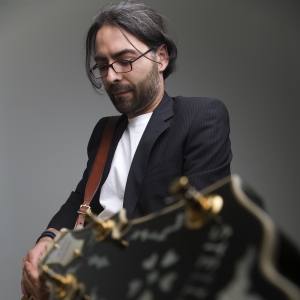 Angel Ruiz was born in Spain in 1968. His first performance was at the age of seven. He studied flute and classical guitar. In 1987 Angel fell in love with the 5-string banjo and got devoted to the instrument. After 8 years studying the banjo (he took private lessons with banjo legend Tony Trischka in 1995) he started his professional career with Denyure Quartet (First prize winner in the Aviles Folk Festival). In 1998 he recorded what he expected to be his first solo album entitled Banjo Stories (A demo recording featuring Angel's own compositions). That same year he also joined Skitarna, a Celtic music band based in Gijon (Asturias),

Angel toured Spain in 1999 and started recoding again in 2000. In 2001, American singer / songwriter Michael Lee Wolfe asked Angel to join his band The Blues Rangers in recording "Corners of the World" in 2003. Angel was featured in the Banjo Newsletter Magazine in the January 2001 issue with a tune from Banjo Stories (Crossroad Breakdown), and in the February 2004 issue with his tune Canceled Ticket" from Lee Wolfe's Corners of the world as "Tablature of the Month."

But 2005 is the year Angel's music was taking off since another tune from Banjo Stories was succeeding worldwide. Banjo Blues won first prize in the International Songwriting Competition 2004 (Nashville, U.S.A.) in the Instrumental Category. This tune was also winner of the Global Rhythm Magazine (New York, USA) Song Contest (October Edition) and featured in their monthly Compilation CD, Winner of the Dr. Lou Radio Blues Show (Philadelphia, PA, USA) and aired in July 2005.

Recently, Angel's composition, "A Matter Of Time," was named as a Semi-Finalist in the 2006 International Songwriting Compotition.