Andy Leftwich - Through the East Gate 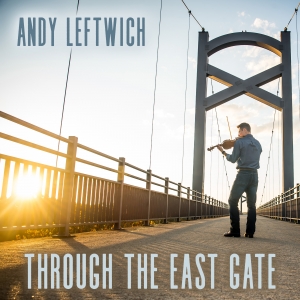 With his first release for Mountain Home Music Company, multi-instrumentalist Andy Leftwich lays down a marker that exhibits not just his virtuosity on fiddle and mandolin, but his musical range as a composer, too. “Through The East Gate” is an instrumental tour de force that offers both an exciting performance and a stylistic tour across the years that led from old-time string band music to the sophisticated rhythms and arrangements of today’s bluegrass.

“‘Through the East Gate’ is a tune I wrote with the thought in mind of combining old style fiddling with the new style of fiddlers that we hear today,” he recalls. “I’ve always loved old traditional fiddling, and I wanted to somehow capture both the feel of the old style and combine it with the exciting licks and melodies that the newer style brings. This song reminds me of friends and family coming together to play music and to have a great time!”

Not surprisingly, the track features a couple of those friends in guitarist Cody Kilby, a long-time Kentucky Thunder colleague who now appears with the Grammy-winning Travelin’ McCourys, and award-winning banjo innovator Scott Vestal. Another friend, noted bassist Mark Schatz makes an appearance, too — adding, as Leftwich notes, more than one dimension: “I was so honored to have the legendary Mark Schatz join me on Bass and Clawhammer banjo. After we cut the track, we couldn’t resist recording a track of him dancing to this one, too!”

From an opening that serves up the definitively old-time sound of fiddle and clawhammer banjo before sliding into a distinctly modern interlude, through solos and ensemble passages that alternate bluegrass and old-time playing on banjo, fiddle and mandolin alike, to its energetic, satisfying and style-straddling ending, “Through The East Gate” is a multi-dimensional work that serves as a perfect introduction to a musician who had already made a place for himself in the world of roots music before stepping out on his own.

About Andy Leftwich
Four-time GRAMMY®-winning instrumentalist Andy Leftwich began playing the fiddle at the age of six, entering his first contest at seven and winning the National Championship for Beginners at the age of twelve. By the time he was a teenager, he had appeared on the Grand Ole Opry and “Music City Tonight” with Crook and Chase, and had established a reputation as a winning contest fiddler throughout the Southeast. At 15, he capped off his contest career by winning Winfield, Kansas’s Walnut Valley Old Time Fiddle Championship, one of the most prestigious contests in the country. At the same time, with mandolin and guitar added to his arsenal, Andy began playing professionally, and before he finished his teens, he had joined Ricky Skaggs and Kentucky Thunder in 2001. In addition to 2005’s solo album, Ride, Andy has recorded two critically acclaimed albums as a member of Three Ring Circle (with dobro player Rob Ickes and bassist Dave Pomeroy), and built an impressive list of studio credits as one of Nashville’s top session players.
9
What's This
Advertisement