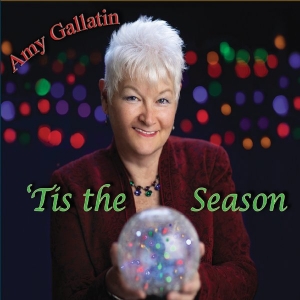 Amy Gallatin, born in Muscle Shoals, Alabama, lived in several states before settling in the West, where she was raised. During her ten years in Idaho and Montana, she had had the good fortune of being able to work at two of her loves in life: horses and music; Amy helped to organize the horseback riding programs and was the featured entertainer at various guest ranches. Her performing background had been as a solo artist out West prior to her meeting some Connecticut musicians while wintering in New England in 1992. With that Connecticut connection came the opportunity to tour as a working unit, so Amy packed her guitar and moved east in the fall of 1993 to pursue her music. Eight albums later--including a "Live in Europe" album and two projects recorded in Nashville with ace producer Rich Adler--Amy Gallatin and her band Stillwaters have taken the stage at some of the most prestigious venues in the U.S., Canada, Mexico, UK, and Europe.Their recent tour of The Netherlands, Germany, Czech Republic, Switzerland and Denmark--the band's fifth--drew extremely enthusiastic crowds at house concerts, music clubs, theaters, country & bluegrass festivals. They have twice had the honor of representing the United States as the featured performers at the European World of Bluegrass convention in The Netherlands.
Amy is at home singing various musical styles -- country, folk, bluegrass or western swing--branding each song with soulful sincerity. Her influences are diverse, ranging from old and contemporary cowboy tunes learned out West, to great country artists like Emmylou Harris, Merle Haggard, Loretta Lynn, and the Everly Brothers.
6
What's This
Advertisement